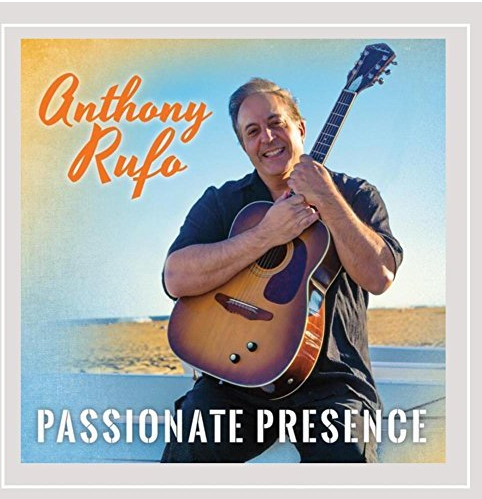 There haven’t been very many guitar records worth writing home about in 2020 thus far, but upon the arrival of Anthony Rufo’s Passionate Presence LP, that’s officially going to change. Rufo’s new record, a thirteen-song anthology piece that crosses as many genres as it can without getting too scattered, is as guitar-powered as they come, but it’s hardly a one-note affair for rock fans this season. Whether you’re a fan of lush jazz instrumentation or pop-sensible songwriting, Passionate Presence is one of the few studio albums I’ve listened to lately that has something to suit most everyone’s needs.

The bassline is understated and quietly circling the backdrop of “E.G.A.H.I.M.P.,” “No End In Sight” and “Eyes of Compassion,” but it’s nevertheless critical to the cushioning of the main melody at the front of the mix. Where some of his rivals might have been quick to bury the sharper leads in Passionate Presence in heavy bass tones, Rufo does the exact opposite here, and in turn produces something that sounds both aggressively melodic and entirely untethered to any of the current trends making waves in the American underground. Originality is everything in indie music, and this artist has it down to a science.

Anthony’s Rufo’s vocals aren’t as big in the mix as I would have liked them to be in “I Am 2,” “Time Stands Still” and “Eagles Fly,” but I suppose I can understand what he was trying to achieve with this. While “Belly of the Beast” is a perfect equilibrium (sonically speaking), these three songs are jaggedly-mixed, creating an additional layer of tension in the music that wouldn’t be present otherwise. He’s pushing us to the edge of our seats in the most deceptively simple way imaginable in Passionate Presence, and that alone makes this an intriguing record.

I really dig the arrangement of this tracklist. From start to finish, there’s scarcely a moment in which songs like the title track, “Empty,” “Advent” and the glowing “Lady of Light” don’t channel some level of progressive-inspired catharsis, sans the cheesiness that comes with full-blown concept albums. Passionate Presence isn’t a straightforward rock opera, but to say that it has the grand theatrics of such a record might be too minor a description for critics to make this May. At the very least, it’s obvious Rufo has some big ambitions when listening to this LP, and that might have been the number one thing he wanted to get through to listeners.

Though I wasn’t following Anthony Rufo prior to getting my hands on a pre-release copy of Passionate Presence just this past weekend, I’m looking forward to watching his professional development more in the future. I don’t think this record is at all representative of what he could accomplish at full creative capacity; contrarily, I believe that all thirteen songs here create a mere glimpse into what he could do in the right venue. Rufo has a lot of ground left to cover, and judging from his new album, he isn’t wasting any time getting right to the task at hand.