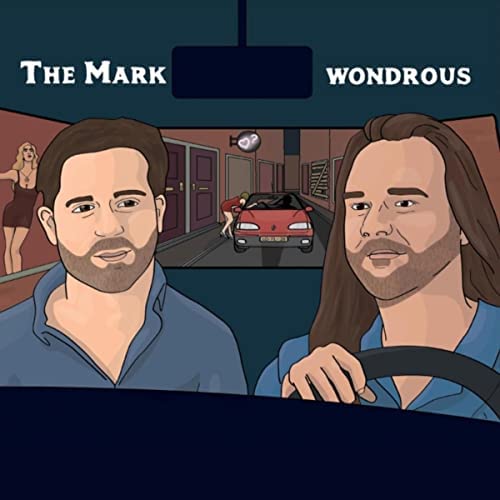 Where do you go when you’ve worked with totemic greats such as Kenny Aronoff, James LoMenzo, Bob Malone, Tony Joe White, Richie Furay, and Billy Bremner? For the band The Mark’s leading man, you don’t do a thing because you must’ve been doing something right — you just keep on truckin’ ahead! The latest single from the band, “Wondrous” doubles down on the already established iconic musicianship of the group, bringing in Ronald Prent and Darcy Proper to give life to a song that was once born out of a pandemic; as the song says, “love is wondrous,” and so is The Mark’s pitch-perfect latest foray into contemporary rock.

“Wondrous” is a song far more complicated than some might at first anticipate; it features a fairly straightforward rock-centric opening but dials everything back immediately when the vocals come onto the scene, nearly muted. The build-up from the end of the first verse to the catchy chorus is pulled off with panache, the song’s pacing airtight. Lead singer Mark Schraven lends a great vocal performance to the track, too, going all over his vocal range from harsh near-whispers to a startlingly good falsetto in the chorus. The general track is light on vocals and the chorus consists solely of Schraven’s falsetto and the words “Love is wondrous,” but that’s virtually all the song needs as the track makes an impression without breaking a sweat.

The history of working with such iconic men who often work from behind the curtain lends a mystique to The Mark and their overall approach to music. Using their output and discography to not only bring attention to iconic session players but give them the spotlight entirely at points throughout the band’s lifetime feels unheard of, but The Mark has been doing it for years. For instance, “Wondrous” is having a single release party in late October and the band is not only performing their music but showcasing the iconic Jerry Scheff, ending the night with a setlist comprised of his numerous musical accomplishments — there aren’t any other bands out there doing things as selflessly as The Mark, and that selfless nature is evident in the music the band records. It’s high-quality music from high-quality people.

Seeing its streaming service debut arrive with the visual aid of a music video on 9/3, “Wondrous” feels primed to make it big. The mesh of classic rock sensibilities and modern rock flexibility is rare to find in a group but The Mark shows they’re down for everything and anything, incorporating electronic aesthetics into the song’s overall production. In modern music production, nothing should be seen as off-limits — smartly, it seems as though The Mark agrees and brings a variety of sounds and textures into the musical sandbox. There’s not a lot of word on what the band has in store next, but the general assumption should be made that the music will be anything but boring, as “Wondrous” only continues to showcase both Schraven’s leading-man chops and the band’s impeccable songwriting techniques.