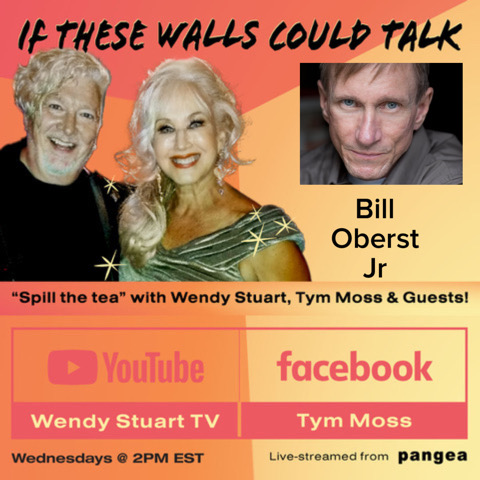 It’s HORROR MONTH on “If These Walls Could Talk.” This week Horror Icon Bill Oberst Jr. is a featured guest with hosts Wendy Stuart and Tym Moss on Wednesday, October 12th, 2022 at 2 PM ET live from the infamous Pangea Restaurant.

Wendy Stuart is an author, celebrity interviewer, model, filmmaker and along with If These Walls Could Talk she hosts TriVersity Talk, a weekly web series with featured guests discussing their lives, activism and pressing issues in the LGBTQ Community.

Actor Bill Oberst Jr. is an Emmy Award winner, a cult horror icon and a self-described “minister of death.” He’s portrayed Ray Bradbury in Ray Bradbury Live Forever, a solo stage show authorized by the Ray Bradbury Estate, and has toured the USA and Europe with a solo stage adaptation of Bradbury’s 1948 novella Pillar Of Fire. Bill is the recipient of the inaugural Lon Chaney Award For Outstanding Achievement in Horror Cinema, presented by Lon’s great-grandson Ron Chaney. His bedtime podcast, Gothic Goodnight, is a 5-star Audible podcast pick. His latest solo stage show is about Satan.

Watch Bill Oberst Jr. on “If These Walls Could Talk” with hosts Wendy Stuart and Tym Moss on YouTube here: