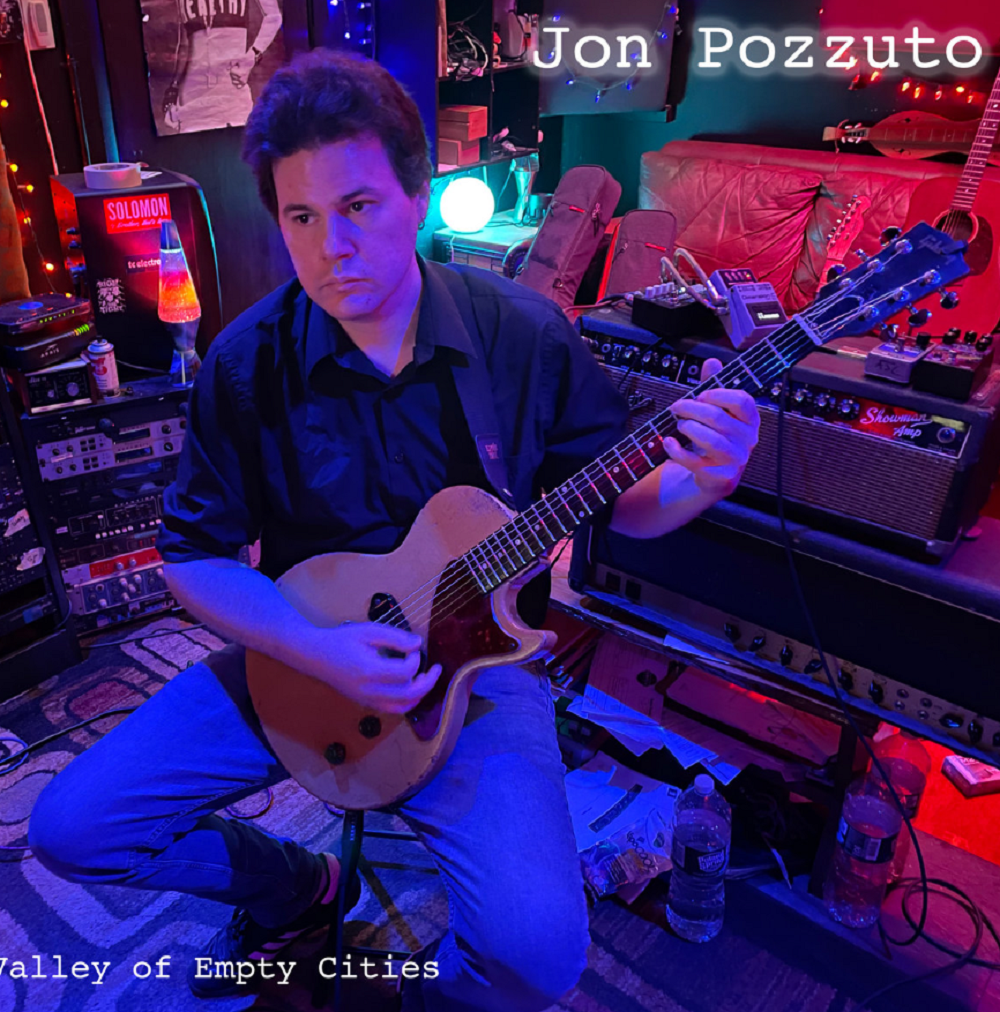 “Valley of the Lost Cities” by Guitarist Jon Pozzuto

The title Valley of the Lost Cities recalls some sort of neglected progressive rock classic from 1975 resurfacing into public recognition. It’s far from that. Jon Pozzuto’s four-track EP debut Valley of Empty Cities is a surprisingly eclectic glimpse of the guitarist/songwriter/multi-instrumentalist and general jack of all musical trades’ prodigious gifts. He even plays a bit of harmonica, and well, for listeners.

Pozzuto is every bit as familiar with Leonard Cohen’s Songs from a Room or Lou Reed’s Street Hassle as he is The Ramones. He’s a lifelong professional musician who knows his passion and chosen life pursuit inside and out, his work appearing on major label releases, and has earned the respect of his peers and students as a first-class guitar instructor. The fact that he’s waiting this long to share his songwriting talents with the world at large is a bit of a disappointment but, as they say, better late than never.

“Dead End Train” made me think of the old Crazy Horse chestnut, performed sans their fearless cohort Mr. Young, entitled “Gone Dead Train”. Listeners can hear this song’s lyrics one of two ways, at least. It can sound like a bit of a clever tribute to Pozzuto’s musical idols while it also makes little bones about its autobiographical import. Confessional lyrics can often come off like reading someone else’s diary entries without a bit of artful restraint though. No worries. Pozzuto brings us up close to the wreckage and near-wreckage of a lifetime, gives a look at some of the bodies, and yet does it in a way we can connect with.

“Love and Death” is the EP’s best song. It’s an emphatic number that Pozzuto sings with a proverbial his-life-depends-on-this focus that reaches its height during the chorus and bridge. He has organ shadowing him throughout those aforementioned parts that contribute immeasurably to their power. The lyrics will often dazzle listeners. “Cemetery Grove” is cut from the same general thematic cloth, the four songs on this EP are nothing if not unified in a coherent point of view and turning from the bluesy posture of the preceding song into the chiming and jangling guitars here is an astute move.

It sets the stage for the last song. Pozzuo decides to go deeper than ever before on the EP into unadulterated hard rock with the title song, but it isn’t a mindless riff-workout. The keyboards blaze right along with Pozzuto’s guitar towards a conclusive finale while he lays down a vocal that, in some ways, reminds me of Blue Oyster Cult’s Buck Dharma.

His guitar skills are comparable. Pozzuto has the same speed and melodic fluency. Enough with comparisons, however, as Pozzuto’s songwriting and playing alike more than stand on their own. His debut EP Valley of Lost Cities does a fantastic job of setting the stage for a full-length release and let’s hope he hits us with that in the near future. These four songs are enough for now, but just barely; we need more.