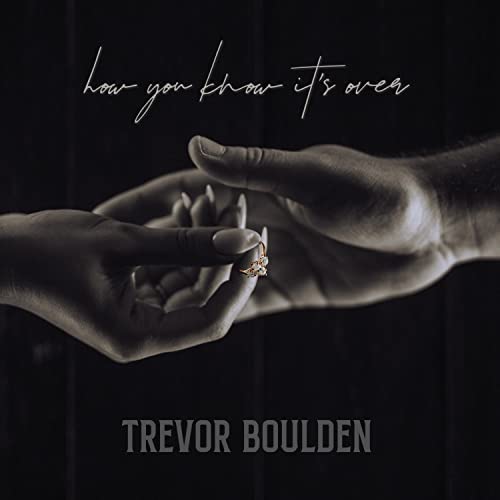 Trevor Boulden’s “How You Know It’s Over”

When you have a voice like Trevor Boulden’s, making a new song becomes remarkably easy. You don’t have to stack a lot of fanciful elements on top of each other to win over the audience, but instead, focus on the bread and butter of your skillset as a means of liberating your harmonies from the otherwise unnecessary elements that would stand between us and them, as we find him doing in the new single “How You Know It’s Over” this January.

Stylized around a hook that is both melodic and a little pointed for what I normally look for in this kind of pastoral, vocal-driven music, the pensive “How You Know It’s Over” has little in common with most of the Americana I’ve been spinning over the past year with regards to the proficiency and depth of its leading man. Boulden is a singer who can do some amazing things with a relatively simple verse, and here, he isn’t hiding the fact that virtuosity of a melodic variety is what he has on his mind more than anything else.

The lyrics in this track are very fetching, and they serve as a solid vehicle through which we can learn a lot about the personality of this vocalist as both a singer and a songwriter. Boulden has a sensible attitude that is never putting his heart too far out of reach for the audience here, and I would even argue that by going with a more vulnerable look with the verses he’s able to circumvent some of the challenges that come with making a ballad whilst delivering a piece that is still sensitive, emotional, and exposed in the way that we want it to feel.

Country and pop music have long been regarded as some of the most expressive kinds of music there are, and the former’s influence over the cadence of the beat as well as the soulfulness of this singer’s style can be felt from one verse to the next in “How You Know It’s Over.” This man is a troubadour, whether he ever meant to present himself that way or not, and it’s obvious in this material.

Big things are sitting on the horizon for Trevor Boulden, and while he still has some room to keep growing into this sound while retaining the identity he’s setting forth in this single, I like the standard being set here and what it says about the potential content he could record in the near future. His is an eager form of vocal-powered musicality, but rightly so; we want him to reach the climax as quickly as possible, and his timing in a track like “How You Know It’s Over” offers us insight into a sort of self-control that could produce some enormous moments in his career. He’s not quite ready for primetime, but with some more discipline in his attack and some time spent in the studio refining all of the best elements in his sound, Boulden is going to be able to do anything he wants with his music.