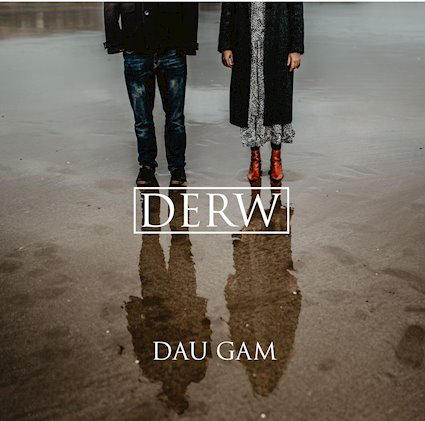 Two steps forward, two steps back. The inner struggle to get to know your own limitations and even discovering who you truly are can be a challenge. Welsh band Derw tackle self-discovery in the lovely track “Dau Gam”. Literally meaning “two steps”, the song is sung in the band’s native Welsh language and is the from their debut EP Yr Unig Rhai Sy’n Cofio (The Only Ones Who Remember) fromCEG Records.

Based in Cardiff, Wales, Derw is the name taken from founding songwriter Anna Georgina. Her and her son, Dafydd Dabson, started the band after a successful run during a 2018 songwriting contest. Derw is the last name of Georgina’s father, a man she also admired for his role as the family’s historian and for sharing memories. Wanting to memorialize these histories, they put them to songs.

Sharing in the journey is singer Elin Fouladi. She has both Welsh and Iranian ancestry, giving her voice a worldly timbre, yet the regality of Norway’s Sissel and pop-like tendencies like Roxette’s Marie Fredriksson. Various musicians from Welsh bans (Zervas and Pepper, Afrocluster and Codewalkers) perform on the album.

“Dau Gam” is riveting. It starts out with an old timey-record playing. The voices and music is mumbled or scrambled, so it’s hard to decipher what is being said or played. Fouladi starts the song, a light, lovely voice accompanied by cascading piano keys. The feel of the song, the mood is cinematic and fresh. Just when you think it’s going to go in a completely different direction, a searing electric guitar riffs. No reverb, no embellishments, just straight rocking guitar. It’s not in the way, but rather just under the radar of Fouladi’s captivating voice.

“Dau Gam” sounds like an old soul of a song, but with a lean, modern energy. I surrendered to the natural melodic textures in Fouladi’s voice, but with each listen I became enamored with the Coldplay-like music bed. I didn’t sense a strong percussion in “Dau Gam” but the rhythmic and organic tones stood out.

What struck me most about the song’s title interpretation of “two steps” is that to truly know oneself, do we have to ask the question where do we come from? Surely our genetic makeup and personalities are derived from the past? Knowing that this band is cognizant of historical facts and tales, “Dau Gam” moves the listener into a head space, as well as contemplative state of admiration for those that came before. I liked the idea that these stories stand out in a way that isn’t loud drumming or constant piano – the sounds are many things and a bevy of melodies and humming. Sometimes stories are rowdy and require an electric guitar, bursting through the folksy meadows. I think having a female voice gives the song a more dramatic listening experience and a home-like feeling.

Fans that enjoy Coldplay, Keane, Snow Patrol, 10,000 Maniacs, Roxy Music – among others- should check out Derw. For the band’s first effort, they have displayed incredible virtuosity.