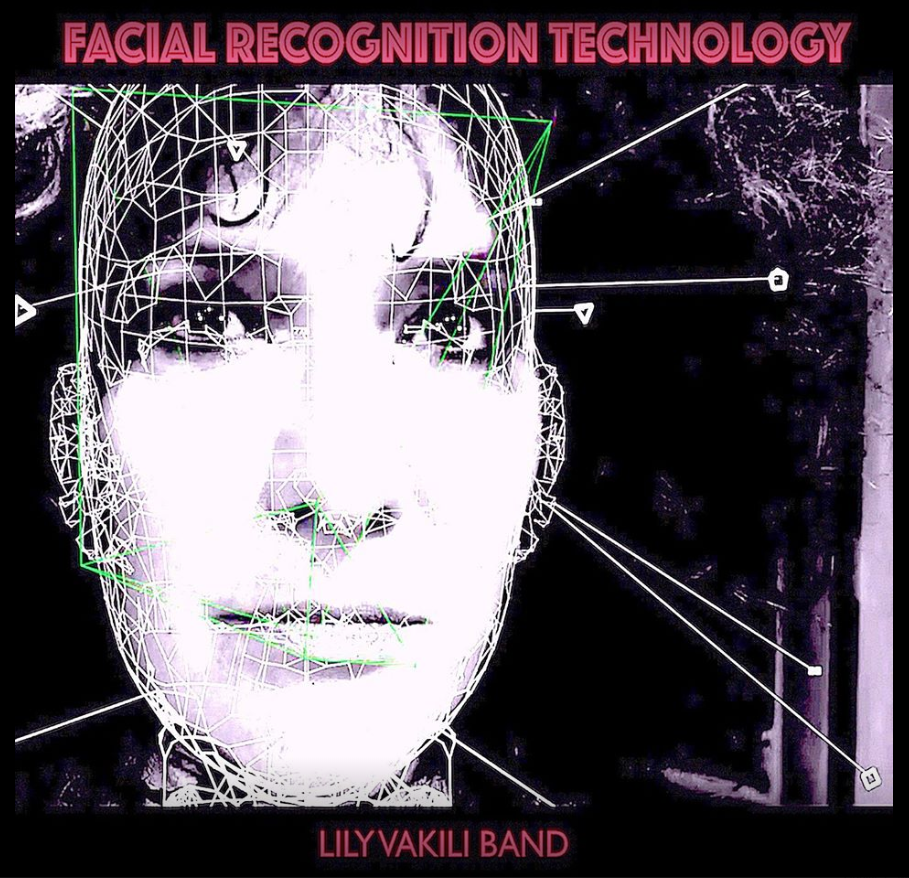 Lily Vakili Band have been conjuring up a storm in the independent press over the past two years, and it’s easy to understand why when getting a peek at their new single, “Facial Recognition Technology.” Non-virtuosic but ambitiously structured nonetheless, “Facial Recognition Technology” invites us to see the world through the lens of tired but optimistic eyes of Lily Vakili, who calls ‘em like she sees ‘em without fail in this latest studio dispatch. Her vocal is as smoking as any of the guitar-driven melodies in this track are, and whether they’re being consumed alongside the visuals of the music video or simply on their own, the lyrics she submits here are absolutely some of her very best – and most honest – to date.

Almost nothing about “Facial Recognition Technology” fits into what I would call a modern, mainstream rock model. There’s an old school, classic rock thrill inspired by the grinding of the guitars, but despite their grating disposition in the mix, they never penetrate the surreal stylization of the vocal with their volatility. The bass is the steadiest hand on the table in this instance, but it doesn’t get as fair a share of the spotlight due to the quake of the percussion, which is easily one of my favorite elements in this song. The beat is as important to appreciating the lyrics as Vakili’s voice is, and that’s not as common as it used to be in alternative rock (especially out of the American underground).

The crooning that Lily Vakili does in this song tells me that she could definitely embrace a more countrified compositional technique if she wanted and sound just as enticing as she does here. She’s got such a diverse skillset to work with, and even though it isn’t being exploited to the extent that I would like it to be in future endeavors, there’s enough here to suggest that the greatest hits of this band’s discography are still to come. There’s no need for Vakili to rush back into the studio – if I were her, I would take my time drawing together as much of a creative nucleus as possible before making a follow-up to the greenhorn album Oh Alright (which was released to relative critical acclaim back in 2018).

You can search high and low throughout the indie rock universe this spring season, but you’re still not likely to find anything quite as unique as what Lily Vakili Band are serving up in the politically-charged “Facial Recognition Technology.” One part paranoid diary entry, another part confessional opus, “Facial Recognition Technology” shows the world exactly who Lily Vakili is as an artist, and whether mainstream critics are ready for it or not, she’s wearing the look she’s fashioned for herself here proudly. This is a band that needs to be on everyone’s radar this Spring, and while they’re hardly a household name at the moment, it will be hard to imagine that staying the same as their music finds a home in the college radio realm this year.