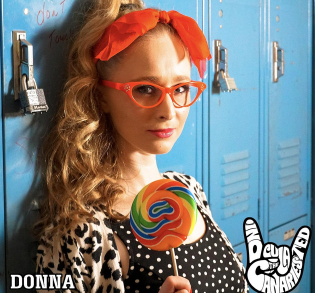 Adorned with an aggressive beat and a sexy groove almost guaranteed to get pop fans swinging, The Inoculated Canaries’ “Donna” establishes a steady foundation of percussive intensity right from the get-go and doesn’t let listeners down in the next four minutes that follow. Designed around an elaborate wavy rhythm, “Donna” is another super-danceable and emotively lyrical power pop single from The Inoculated Canaries, whose profile has risen to the spotlight in 2019 mostly on the strength of their hard-hitting rock aesthetics and one of a kind melodicism. Their latest release is accessible to fans both old and new alike, and it might qualify as their best track of the year by critical standards.

“Donna” has one of the best mixes I’ve heard from an Inoculated Canaries recording, but it doesn’t strike me as being overly varnished in the least. There’s a pop sensibility to the finer points of the song, although I wouldn’t go as far as to say that it’s 100% radio-ready; to be fair, there’s a textured edge to the guitars that is abrasive in spots (in a good way), and unlike some of their past releases, I feel a lot of more of a punk rock influence in the construction of its hook.

The urgency in the rhythm here is excellent and lights a blazing fire instantly upon our pressing play, though I would note that the grooves are meticulously designed and nothing sounds particularly rushed or thrown together. The Inoculated Canaries put a lot of time and attention into their work (just look at their last two videos for this song and “Sneakers” for ample evidence of their cinematic skillset), and it’s in little details like the structure of a percussive part that they often outshine their closest rivals the most. “Donna” isn’t very complicated, but it features a smorgasbord of intricacy in its melodies just the same.

I thought that the harmony between the vocal and the horns in the chorus was a lot more potent a cocktail than any of the verses were on their own in this song, but this isn’t to dismiss the lyrics as being something of a mere add-on here. The band is conveying a lot more emotion through their music than they are linguistics in “Donna,” and despite the duality in their compositional approach, they’re not coming across as scattered at all. It’s tough to pull off, but next to old tracks like 2015’s “Don’t Be Late,” The Inoculated Canaries are getting a lot better at rounding out their sound.

While I just recently started getting into this band’s music on a more serious level, I really dig their vintage Seattle sound-influenced take on distorted riffage and decadent rhythm, and I think they’ve got enough in the tank to produce a full-length album for us at some point in the near future. “Donna” essentially follows the same formula that the band exploited in their last few releases, but even though some critics would consider this to be a negative thing, I completely disagree. The Inoculated Canaries are developing a reputation for consistency, and in 2019, that’s a rare gem to find all by itself.