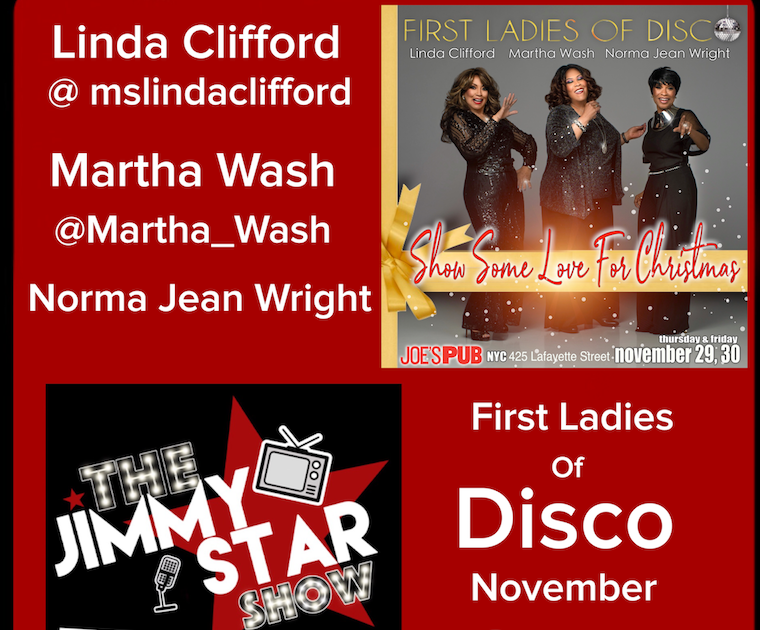 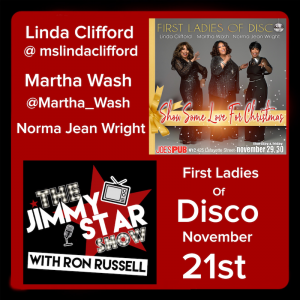 The First Ladies of Disco, Linda Clifford, Martha Wash and Norma Jean Wright be featured guests on The Jimmy Star Show with Ron Russell live radio/tv show hosted by King of Cool Jimmy Star along with Cool Man About Town Ron Russell to discuss their new show, their careers and the entertainment industries at large. The Jimmy Star Show with Ron Russell is tv/radio’s coolest hit show, featuring the best in music, entertainment, fashion and pop culture, all from a fun industry insider perspective in a completely live, unedited fast-paced two-hour conversational format.

The First Ladies of Disco Show, a big bright spot on the live performance circuit, is a touring retro-dance, pop, rock, r&b experience.

Three extraordinary women who have made their marks on the pop, rock, r&b and disco charts have joined forces for the first time as First Ladies of Disco. The vocal power of this new ensemble is unsurpassed, and their style and energy meld perfectly on stage and in their debut single, “Show Some Love”, which climbed to #6 on the Billboard Dance Club Charts in 2015.

Martha Wash is a platinum selling, two-time Grammy Nominee, known for her distinctive and powerful dramatic soprano voice. Ms. Wash has been dubbed “The Queen of Clubland” due to her ongoing success in the dance music genre. Martha’s fame would have made her mentor, the late disco pioneer Sylvester, proud. As a member of The Weather Girls (previously known as Two Tons of Fun), Wash achieved tremendous success with the immortal “It’s Raining Men,” one of dance music’s all-time greatest hits. Wash also performed lead vocals on Black Box’s chart-toppers “Strike It Up” and “Everybody Everybody,” as well as C+C Music Factory’s “Gonna Make You Sweat (Everybody Dance Now),” which hit No. 1 on the Billboard Hot 100. After 10 years, Martha recently returned to the Billboard Dance Charts with her hit single “I’m Not Coming Down,” which reached the #2 spot topping Cher, Jennifer Lopez and Lady Gaga. In 2015 she reclaimed her spot at number one with “Free People” a reverting collaboration with famed D.J. Tony Moran bringing her Billboard number one counts to a staggering 14.

Linda Clifford, a five-time Grammy Nominee, scored numerous hits from the 1970s through the 1980s, most notably “If My Friends Could See Me Now” and “Runaway Love,” the latter considered a landmark innovation in rap history. In 1980, she released a duet album with R&B legend Curtis Mayfield, The Right Combination. She recorded the popular “Shoot Your Best Shot,” produced by Isaac Hayes, and the song “Red Light” for the soundtrack of the smash hit movie Fame. Both songs reached #1 on the American dance chart and enjoyed pop crossover success.

Norma Jean Wright, there’s much to celebrate about Norma Jean Wright’s career in dance music. As a heritage artist with numerous accomplishments highlighting her professional career, this elegant and divinely voiced singer and songwriter exemplifies the very best the genre has to offer. The Ohio-born vocalist was right there at the beginning of the ’70s disco explosion as a key member of the seminal group Chic. Her powerful voice glided across the infectious beats of producers and fellow group members Nile Rodgers and Bernard Edwards and helped catapult Chic’s 1977 single “Dance, Dance, Dance” to the Top 10 of Billboard’s pop chart. The feat was nearly duplicated with the follow-up hit “Everybody Dance,” a number one smash on the dance chart. “The chemistry between Bernard, Nile and [drummer] Tony Thompson was tight. There was something special about them as a unit; it was magical,” says Ms. Wright in the book by James Arena, First Ladies of Disco (2013, McFarland). “Sonically, it was a melting pot of sorts, with Bernard’s background in funk and R&B, Nile’s classical training and Tony’s studies in jazz,” she added. So exciting was this talented performer that Rodgers and Edwards produced a solo album for the singer in 1978 called Norma Jean. The set yielded a Top 10 dance chart hit with the single “Saturday.” In the ’80s, Norma Jean continued to record hot dance music for major labels, including MCA Records (“Shot In The Dark”) and Mirage/Atlantic (“Love Attack”). In addition to her lofty success on the disco circuit, Norma Jean has been a sought-after session singer. She’s worked with the best in the business, lending her voice to recordings by Madonna, Luther Vandross and Aretha Franklin, among many others. She’s also been a well-regarded back-up singer for Randy Crawford, Will Downing and fellow disco divas Sister Sledge.

The Jimmy Star Show with Ron Russell is pleased to showcase the expertise and talent of The First Ladies of Disco and all anticipate a fun and informative time talking with them about their career and the entertainment industries at large.

To hear/see The First Ladies of Disco live on the Jimmy Star Show with Ron Russell tune in to W4CY radio on Wednesday November 21st, 2018 from 3-5 pm ET and 12-2 pm PT online at http://www.w4cy.com from anywhere in the world! Follow the Jimmy Star Show on Twitter @jimmystarshow