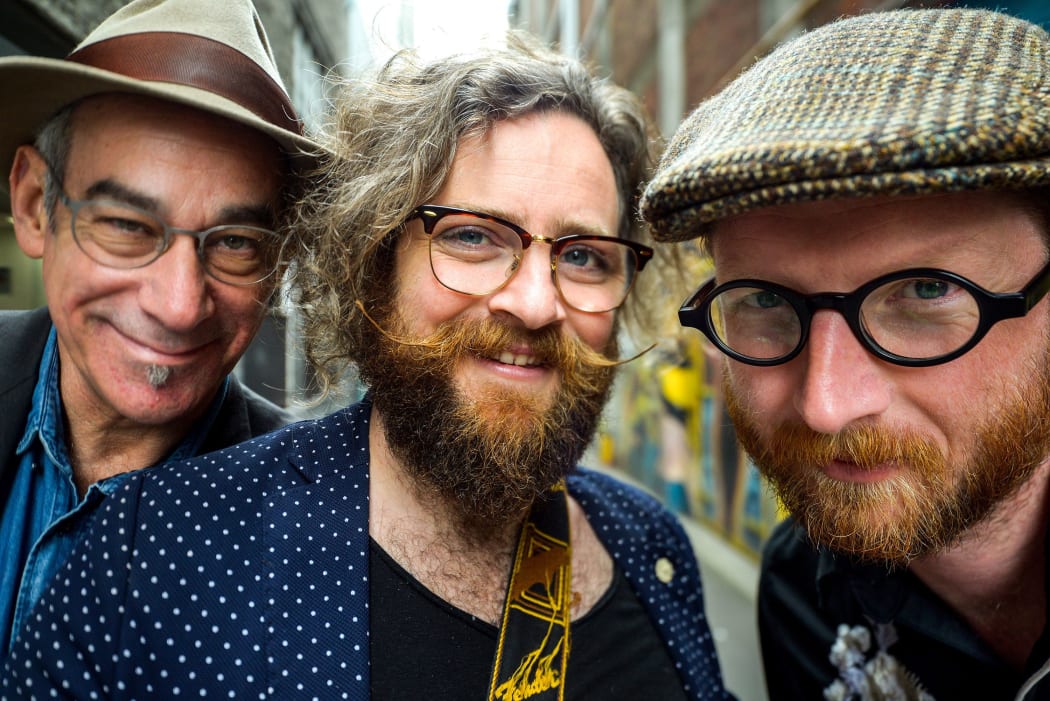 Few bands or acts, in any music genre, can boast the wide-ranging eclecticism of T-Bone. Three New Zealanders, one American, and one Irishman come together from various walks of life to produce an unique debut album entitled Good ‘n Greasy. Emerging from the New Zealand music scene with a bevy of influences, such as bluegrass, zydeco, blues, folk, and strands of Kiwi folk as well, the album’s eleven songs take listeners on an imaginative ride. Songwriter Gerry Paul and his bandmates synthesize these seemingly disparate strands into an individualistic yet recognizable whole certain to pull countless listeners into their orbit. You’ll begin listening to these songs knowing little about T-Bone and end the experience as a fan.

The vocals for “Lucille” begin with a count-in and, despite the acoustic sound, fiddle, and so forth, it’s as pure of a blues as you’ll hear. There’s woozy and even rollicking desperation in this performance that doesn’t repel listeners, the fatalism is celebratory if nothing else, and the vocal puts a colorful exclamation point on the mood. Many listeners will be taken with the low-key but undeniable instrumental fireworks generated by the band’s interplay. “T-Bone Rag”, the album’s second track, is a type of song you likely haven’t heard in ages, a “band” song celebrating their vocation. There are other layers, as well; it’s impossible to ignore the specific details T-Bone includes in the lyrics. The musicianship remains as high as ever.

“I Like to Ramble” is an ode to vagabond life and all that comes with it. The songwriting runs roughshod through a wealth of traditional imagery for this subject matter, but Paul’s songwriting phrases these familiar images in a personal way that elevates the song. It isn’t a pastiche but, instead, revamps traditional modes for modern audiences. “You Didn’t Write Me Letters Back” is the album’s longest track clocking in at a little over five minutes. Alternating between a single lead vocal and strong multi-part harmonies is a key to making this song work and the payoff line is especially punchy. There’s an unexpected surprise in the song, but it never feels or sounds arbitrary.

The warm yet elegiac quality of “I Hope that Time Passes Me By” will strike a chord with many listeners. Universal fare such as this gives artists and bands a chance of landing a lasting foothold with audiences rather than entertaining them with gimmicks and shallow packaging. Michael Muggeridge’s mandolin and lead vocals are worth the price of purchase alone, but one of the band’s true deep strengths rises to the surface yet again. Paul, fiddler Richard Klein, double bassist Aaron Stewart, and banjo picker Dusty Burnell supply soulful and melodic backing vocals.

“Keep My Skillet Good and Greasy” is a traditional tune benefitting from a refitted band arrangement and highlights Richard Klein’s vocals once again. Klein has arguably the best voice for the band’s blusey material and sounds as deep fried Southern as it comes with his performance here. It has an appealing shambolic quality, off the cuff, but thoroughly lived in. It’s a defacto title song for this release and illustrative of the band’s best attributes.

Their successful tour of New Zealand’s North Island has further raised their status as a band to watch and the band’s association with Linktree puts all of their most pertinent promotional and musical material a click away for listeners. It’s an impressive overall package encouraging us to keep coming back for more.