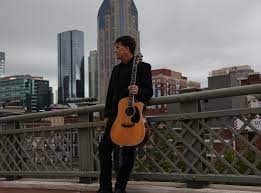 Singer/Songwriter, Chris St. John is preparing to release his second album, Fly Away. Fly Away is a LP that deals with themes such as family values, introspection, and gratitude. Chris cites his relationship with his son as a major inspiration for this record, and his emotional awe as he has watched him grow into a man. Chris is an Adult Alternative artist with several different elements in his music. He’s able to seamlessly blend an array of genres into each individual track on the record.

Prisms shimmer through my window/a rising moon steals the show. There are countless moments of benevolent lyrical imagery, throughout, Fly Away. “Look For Me,” is a tranquil and soothing piece that is mixed, beautifully. There are so many interspersed bits of subtle musicality, and perfectly timed interludes. It’s a theme throughout the record, but it must be acknowledged. “Look For Me” is peacefully arranged and a gentle reminder of nature’s benefits to spiritual health.

Bright piano gives way to acoustic guitar on the intro to “Nothing Left To Say.” It’s one of the more up tempo pieces on the record, and it ends up sounding like the love child of James Taylor and Counting Crows. There’s a solid guitar solo around the bridge that channels the best of country rock. “Nothing Left To Say” is a bit of a surprise moment on the record, as it puts out a different energy than much of the rest. Go out of your way to give this one a listen.

Hold your faith/there will be days you need it son. The album title track, is the one most deeply impacted by Chris’s relationship with his son. “Fly Away,” deals with that all too familiar to some, story of a child becoming an adult and setting out on their own. The song begins faintly and calm, and as soon as Chris sings the line, Fly Away, the drums kick in. It’s a metaphor for how quickly and jarringly our lives can change in an instant. While this one is much more straightforward, lyrically, than the majority of the record, its emotional poignancy is profound.

Like, “Nothing Left To Say,” “Walk Between The White Lines,” sounds like music from the 90s conjoined with vocals from the 70s. It also has something of a traditional Country & Western backdrop. This song comes across as something of a reflective piece for Chris, as he jumps from one anecdotal reference to another. He addresses everything from his youth to alcohol to the women in his life. While not as pulsating as “Nothing Left To Say,” this is a track worth visiting.

It’s pure conjecture, but one would conclude that Chris has achieved exactly what he set out to with this record. It’s inward, yet feels like it’s just as much for us as it is for him. His subtle blending of genres is highly impressive, and there isn’t a wasted moment or overly indulgent sections. These are Pop songs for mature adults who aren’t looking so much for sizzle as they are for substance. Chris St. John flies high and takes us away with him on his latest release.