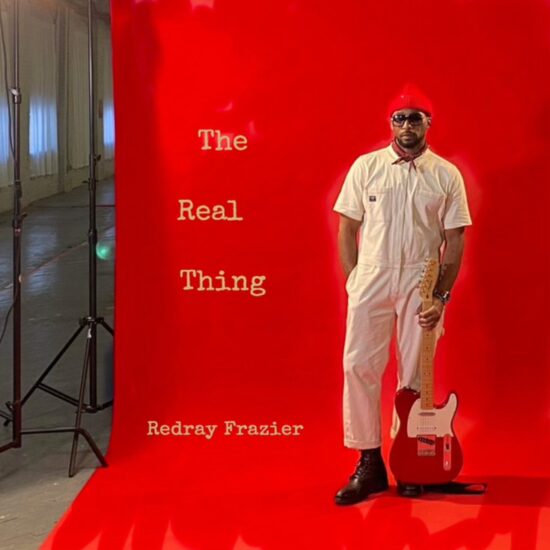 Redray Frazier’s “The Real Thing” is every bit as unique as the performer himself. Frazier brings an one of a kind confluence of influences together in his music ranging from Leon Bridges, The Beatles, Jose Feliciano, Britany Howard, and Nina Simone, among many others, and transforms them into something singular. He’s a long way from his New Jersey childhood singing in his father’s Baptist church choir. Now based out of Portland, Oregon, Frazier’s latest single “The Real Thing” is full of the vibrantly soulful sound defining his earlier recordings and shows how this veteran performer is far from slowing down.

Frazier is especially adept at marrying the modern with the traditional. “The Real Thing”, in some ways, is one part neo-soul with a smattering of hip-hop delivery making its way into his vocal, another part light funk, and singer/songwriter sensibilities creeping their way into the mix. It’s undeniably smooth. The surface texture of the song is full of seamless transitions and the mix takes a balanced approach rather than highlighting any specific element.

The elasticity of Frazier’s voice is a huge selling point for his work. There’s a melting pot of influences in his work as well; you may even hear a Lenny Kravitz influence in some portions of his singing. His ability to morph from the cool and clipped delivery in the verses to the near-croon he achieves during other vocal passages sets him apart. It never sounds like he’s attempting to make two disjointed approaches cohere but, instead, achieves an effortless union between the vocal personas. His range is deceptively large, undoubtedly owing some to his upbringing.

He’s orchestrated the song well. It doesn’t show all of its cards at once but, instead, incorporates several peaks and valleys into the track and provides a compelling ride through each one. One can attribute such talents to experience, and it does play a role, but what we’re hearing with Redray Frazier’s “The Real Thing” is much more the product of innate gifts the performer has long since mastered.

There’s a definite thrill hearing someone so wrapped up in the creative act. He conveys joy at every turn through “The Real Thing”, as well as longing. He’s also a singer thoroughly in tune with the music rather than trying to overshadow the arrangement. “The Real Thing” has just the right length for modern audiences as well without ever sounding or feeling like Frazier is compromising himself to give listeners what they want.

He isn’t that sort of performer. Frazier is, instead, a musical artist who follows his own inner voice and has enough confidence to believe that, if he stays true to that inner voice, listeners will invariably follow. It’s proven to be true. Frazier has been at this for a number of years now and, with each new release, his fans and admirers only continue to grow. Take the chance to encounter an artist near or at the peak of their considerable powers and you’ll undoubtedly be satisfied with that gamble.