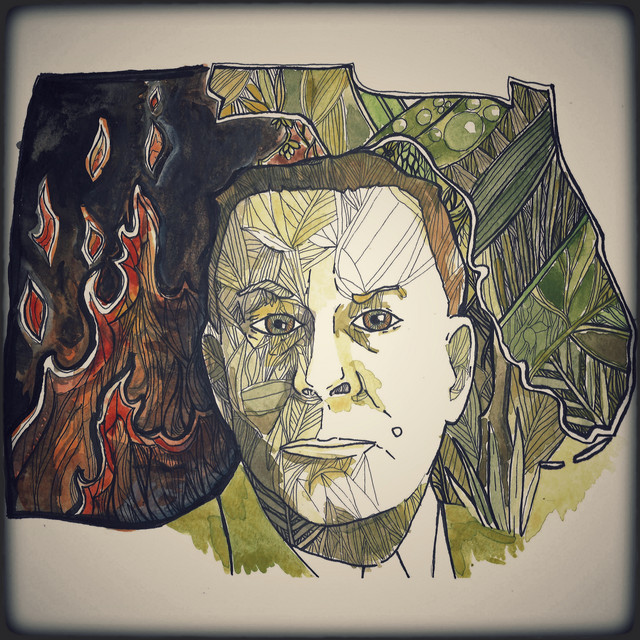 What does a poem collection from 1923 have anything to do with an album slated for February 2020 release? The answer: Jesse Blank Rundle. Rundle, a self-taught musician, is an artist that has done his fair share of tinkering around with sounds and finding his own voice in music. His debut Radishes and Flowers is expected early next year and includes the first release, “Nomad Exquisite”. This is where 1923 comes into play – “Nomad Exquisite” is the name of a poem from Pulitzer Prize-winning poet, Wallace Stevens. Rundle uses the words and recreates the lines into a stunning, lack for the better word, ‘exquisite’, musical journey.

Rundle bridges the past with a modern-sounding track, rich with acoustic guitar use. He doesn’t overdo the guitar, but it’s a solid sound. The percussion is softer. His voice stays within certain parameters, but his melodic voice carries a soft, beautiful essence. According to the description on his site, “this song takes you straight to the everglades – it’s an explorer’s song. The line “As the immense dew of Florida,” keeps repeating and acts as an invocation of Florida’s humid air and all that it brings with it: sweat, grass, trees, life.” I closed my eyes to imagine what that precipitation, that dew, would sound like. I feel like Rundle captures that movement, that sound. The song isn’t a pick-me-up song, and there are times when the beginning measures do feel like a moving car, or a boat gliding over the water, but Rundle really nails it with his opening melodies brushed up against the guitar strumming.

Rundle hails from Idaho and it occurred to me that he wasn’t actually in Florida and he’s singing about the marshy, swampy, national treasure. What an imagination to sing about it, and yet I felt like he was just strumming along on his porch or something. Like he was right there at the everglades next to an alligator! I digress. He really paints a clear image, and he gives you the Florida state-of-mind. He does it more so in the sound than the actual lyrics. The prose, the lyrics are genius. We know this. But Rundle catapults the poem on a higher level and one so easy to embrace with his fantastic guitar work, modest percussion and humbled trombone orchestration. This song is a love letter to nature.

This song transformed me. It made me want to dive down and into the poetry of Wallace Stevens. It also made me so curious as to how a self-taught musician like Rundle chose this particular poem as his first track for Radishes and Flowers. I don’t know the answer now, but I will instead continue to listen to “Nomad Exquisite” and fill in some of the blanks with Rundle’s indie-rock / folksy guitar and captivating voice. What poem will he choose next? Will it be from the same collection? I will have to wait and see. Till then, I will journey to the everglades in my own imagination. “Nomad Exquisite” is decisively wonderful.