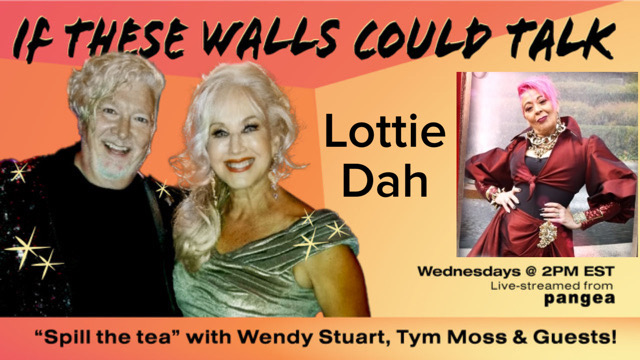 Lottie Dah will be a featured guest on “If These Walls Could Talk” with hosts Wendy Stuart and Tym Moss on Wednesday, February 2nd, 2022 at 2 PM ET live from the infamous Pangea Restaurant.

Lottie Dah appeared on the music scene in 1983 during the tremendous Latin Hip-Hop era bringing her music to the dance-craving masses of New York City. Her debut came with the group Up Front featuring their mega-hit single “Infatuation,” which went on to sell two hundred fifty thousand copies. From that point on, Lottie was well on her way to introducing herself to the dance-music scene. Lottie Dah Is a well-rounded performer who studied the performing arts in every capacity. This showed in her stage command presence and performances from New York to Florida and abroad; performing in all of the top popular clubs.

In late 1985, she helped to form a group called “Leather & Lace” that brought us songs like, “Tender Heart,” “Let Your Body Go,” and “Rock Me, Shake Me.” Leather & Lace became the first Latin female ‘trio’ group to introduce the sound of Free-style that later dominated the club-music scene. Lottie Dah is a solid pioneer in the free-style music genre. Her experiences have expanded into another side of the music business where she is now involved with a music production company, “Kaos Music/In 2 Deep Productions.” Lottie helps to guide other artists who dream of becoming a big part of the music industry and also hosted an internet radio show via Von/Fence Radio. In this forum, Lottie promoted and directed numerous showcases.

Lottie Dah continues with her vision to help lead others into the music industry along with U5: Entertainment. “It’s not only an aspiration in my heart, but it has also been a long desired and awaited journey, where I’m eager to pursue and conquer.”

Watch Lottie Dah on “If These Walls Could Talk” with hosts Wendy Stuart and Tym Moss on YouTube here: