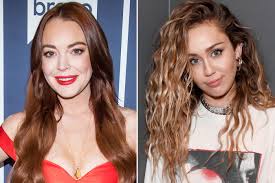 Lindsay Lohan is urging Miley Cyrus to join her on the beach in Mykonos, Greece after learning the singer is a big fan of her reality show.

The Mean Girls star launched her new MTV venture, Lindsay Lohan’s Beach Club, last month (January 2019), and though the reviews were mixed, Miley was a huge fan, calling it “the best show ever”.

Now, Lindsay has invited the Wrecking Ball hitmaker to join her in the sun for a guest spot on the reality series, which chronicles the former child star’s efforts to run her Lohan Beach House club.

“I love her,” Lohan tells People of Cyrus, “and she’s been so supportive of everything that it’d be amazing to have her there. It would just be a great honour and I’d be so grateful. We’ve known each other forever and I love her…, so it would be a cool thing.”

The idea of Cyrus joining Lindsay on the show isn’t too far-fetched – last week the 26 year old tweeted a video of herself singing along to Lohan’s 2004 song Rumors.

Meanwhile, Lohan admits she’s having a hoot as a reality star now she is getting used to conducting business and interviewing potential staff in front of the cameras.

“When the cameras were on I was very nervous, because I also have to handle the club,” she said. “So I was a little bit shy and timid. When I’m doing a movie, that’s my job. When I’m running the club, that’s my job. Handling people I’ve never met before is not my job. So it was a very multi-tasking situation. But it was nice.

“I like understanding people and teaching them, so it felt really good for me. But it was definitely scary!”