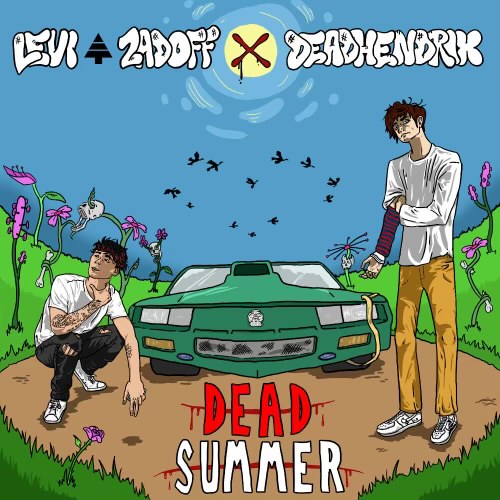 Levi Zadoff and Dead Hendrix have merged their collective visions to arrive at the new EP, Dead Summer, just in time for, well, summer. Dead Summer is a reference to the lost mid-season of 2020, a time that represents both a shared and unique experience for all of us. The title has a dual meaning in that it’s both literal and metaphorical. Zadoff is based out of the West Coast and Hendrix out of Ottawa. Together they have arrived at something familiar, but not lacking in quality.

Dead Summer is essentially a Pop-Punk record with an extra dose of attitude. Hendrix and Zadoff bring a faint maturity to a genre that is, in theory, fundamentally opposed to it. In this case, it’s a breath of fresh air, as these two give the album a greater sense of urgency thanks to their edginess.

“Love Game” might be the centerpiece of Dead Summer, as it satisfies all the hallmarks of the genre. This one goes the extra mile, though, as Zadoff and Hendrix really throw themselves into the process. The backing vocals are pristinely mixed in a slightly crude fashion, and it’s emotionally satiating in an almost looping way. The track features some truly eye-raising lyrics, such as Trapped inside My head/like I’m snowed in/I been goin crazy/like I’m Cobain. For me, “Love Game” is one of the high points on Dead

On “Don’t Think It Could Get Much Better,” the pair really lean into the Pop-Punk cliches. The song sounds like an authentic recipe for Blink-182, with some modern MGK seasoning. It’s certainly an enjoyable and well-performed track and will take residence in your head.

“Can’t Be God” actually steps away from the Pop-Punk genre slightly and becomes more of a modern Dance-Pop track in minor-key. The guys show a decent range on this one, as well as cementing the notion that Dead Summer has mainstream potential.

The youth is palpable on this one, and don’t be surprised if you hear it popping up in a variety of places.“Alone” is likely to be something of a polarizing piece, as anyone below the age of 30 is almost certain to resonate. It’s got some cute references, such as, “I sit alone in this jag,” showing that the two have a sense of humor.

Levi Zadoff has said that this album is a culmination of his previous work thus far. The collaboration between him and Hendrix has been an unusually organic one, and we can only hope that they continue to produce. If you’re a fan of this genre or just experienced the pandemic through the eyes of an adolescent, you will likely love this record. Don’t be fooled by the title, as Dead Summer has a healthy, beating heart behind it, and that aspect is what is most likely to connect with audiences. The EP is now available for streaming.