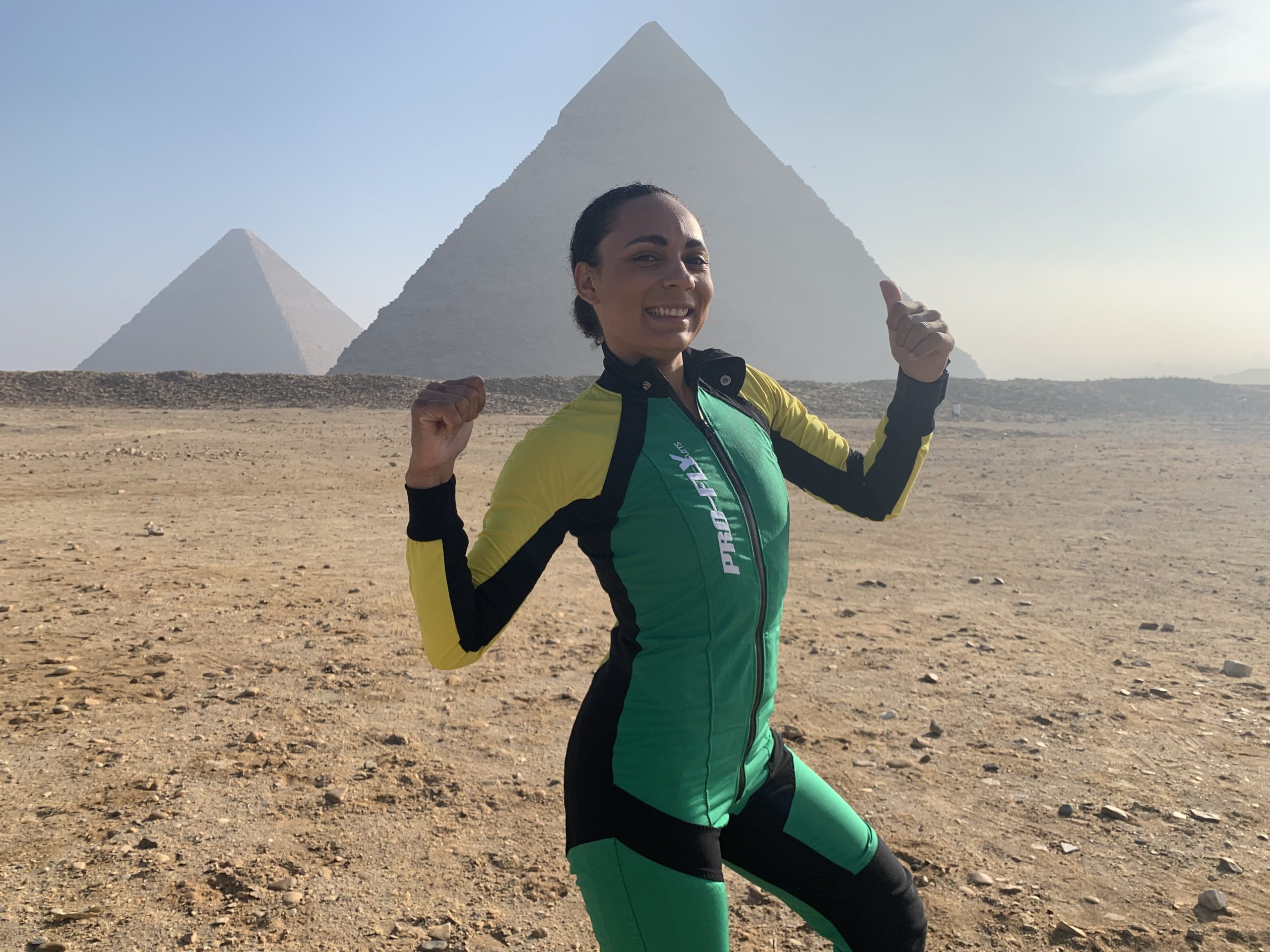 Shelita aka Shelita Burke has built a career on being a trailblazer as she is the first artist to launch an album on the blockchain that has charted on Billboard. On November 8th, 2020, Shelita has not only set a record in becoming the first African American woman to skydive over the Pyramids in Egypt during Skydive Egypt’s Jump Like A Pharoh event, she is also among the first professional musicians to skydive over the Pyramids.

Skydiving in Egypt is extremely rare, less than 200 people have ever jumped over the pyramids. There is no official dropzone in Egypt, Mustafa Saeed and his team from Skydive Egypt is working on changing that.

According to the United States Parachute Association 13% of its members are women. When asked if Shelita is intimated by being in a male dominated sport, “It is not about my gender, it is about what is possible for humanity. Yes, I am still very new to the skydiving sport as I just got my B license this year, however being a new jumper does not hold me back from aiming high (literally) and setting bigger goals for what is possible for humanity. There is a lot of room for innovation in skydiving regardless of gender. I hope that when people see what I’m able to do they see what’s possible for themselves.” Shelita says.

Shelita learned to skydive in California at Skydive Santa Barbara.  ”At Skydive Santa Barbara you really feel like family. I’m so grateful for my sky family there. They have been very diligent in making sure I am safe and guiding me through the challenges in this sport. When you start skydiving it is important to choose the right drop zone that really cares about your growth.” Shelita says.

Skydiving has inspired Shelita to write songs in a different way and after each freefall, she writes a new song from the insights that she receives from the experience.  She has been performing pop up livestream concerts on Facebook of some of those songs.

Multi Grammy nominated and Music Industry Executive Michael Drexler has also set a record in being among the first professional musicians to skydive over the pyramids. It was Michael Drexler who introduced skydiving to the billboard charting artist as a cure for her fear of heights.
”Before skydiving I was extremely afraid of heights. It took me 2 hours standing on a ledge looking down to dive off a cliff in Jamaica into water. It took me 5 seconds to jump out of a plane during my first skydiving experience. After my first skydive, heights were no longer an obstacle. I feel the sky is not the limit anymore. The sky is our playground. Life is our playground.” Shelita says.

Although Shelita is a new skydiver, she hopes to inspire more people to transcend past their fears and try out the sport. “Skydiving is like mediation on steroids, I think everyone should try it at least once in their life, when you do you feel the ultimate freedom consciousness” Shelita says.
To learn more about Shelita’s journey follow her on Instagram: https://instagram.com/ShelitaBurke