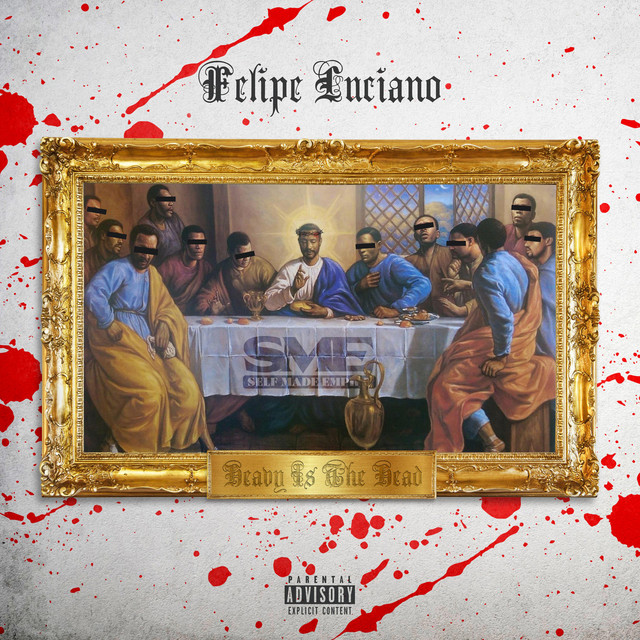 Felipe Luciano has a lot to say on his latest release, Heavy Is The Head. A reformed product of the system, Luciano is as hardened and focused as they come. His takes on life as well as his performances on Heavy Is The Head, are both fueled by true grit and an uncompromising honesty. At 10 songs, the album actually moves along quite swiftly and never allows the energy to dwindle. Luciano brings a distinct style to the table that is calculated, raw, and inimitable.

Right from the jump, Luciano poses the question, if not me, then who?/if not now, then when?, on “Inheritance.” He wastes no time by informing us that what we are about to hear is of epic proportions. On “Big Business,” we get a snare driven track that fits so much lyrical content in, that multiple listens are practically essential. Luciano’s verbosity is a theme that spans the entire album if you’re wondering. “Think Big” is comparable to “Big Business,”  in tone and context, but with Luciano’s unique delivery, there is inspiration to be found on this track.

With a voice that sounds as though it’s been pushed to its absolute limits, Luciano delivers “Duckin,” which features Gunplay. Like most of the album, this is one is designed for you to bump while cruising the streets of wherever you’re indigenous to. “Dear Summer,” hears Luciano go inward for something of a let me up track that ends up being a standout. You ain’t a boss/I can tell by your conversation, Luciano raps in an example of keen observation. The pace and arrangement of this track makes it impossible not to lose yourself in thought to.

“Bigger Dreams,” has Luciano identifying the difference between himself and his peers. Part daydream and part declaration, “Bigger Dreams” is a quintessential piece from Heavy Is The Head. A mentally fatigued sounding Luciano allows the first hint of vulnerability to be heard on “Best Advice.” The song basically documents the Rapper’s complex relationship with women, as he offers his “Best Advice.” This track has Luciano sounding less sure of himself than at any other point on the record, and brilliance is the result.

“Speakerphone,” boasts what may be Luciano’s finest moment on Heavy Is The Head. The Rapper maintains a pace that is rapid but restrained, as he makes a play for most syllables uttered in a single verse. There’s a sensible and well served piano riff featured on this track that gives it a distinctive subtlety as compared to the rest of the album. If you’re going to seek out one track from the album to measure your interest, choose “Speakerphone.” It’s the work most likely to sell you on Heavy Is The Head.

The cover art of the record reimagines the portrait of the Last Supper painting that is as unforgettable as the content within. You can easily take away that Felipe Luciano approaches everything of significance in his life with uncompromising intensity. Heavy Is The Head is replete and well produced, at times bordering on emotionally excessive. Even with all of the typical tropes of Rap, this record never leaves you feeling bloated or over served. Felipe Luciano has taken the core of Rap music back to its roots by embracing and reconciling a flawed yet beautiful life.