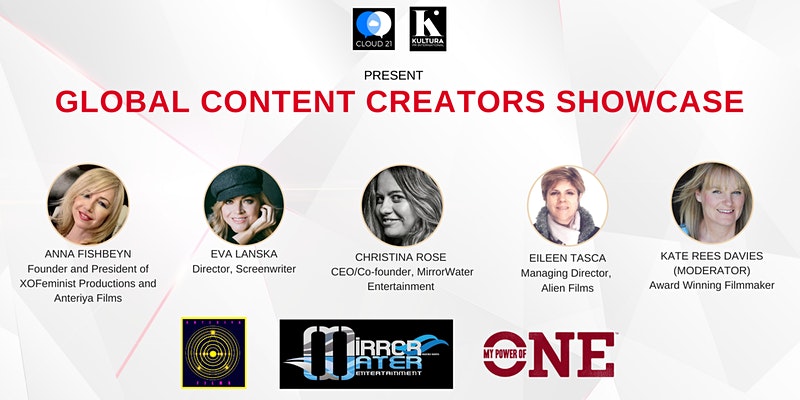 Los Angeles, April 5, 2021 – Cloud 21 PR International and Kultura PR International  are pleased to present the inaugural installment of its latest franchise “Global Content Creators Showcase 2021” a special event that will be held virtually during MIP-TV 2021.

Register for the complimentary event at:   https://www.eventbrite.com/e/global-content-creators-showcase-2021-tickets-149435247849

“Since the pandemic began, we have taken our special events online, which has proven to be extremely successful,” comments Nicole Muj, founder Kultura PR International. “So much so, we decided to launch our new franchise, the Global Content Creators Showcase during the time of MIP-TV. We’re delighted to share the amazing works and projects of our all-female panel with the international entertainment community.”

“We have curated a truly impressive panel of women filmmakers and producers for our inaugural event,” adds Gotham Chandna, president, Cloud 21 International. “We have found that taking these events online expands our audience thousandfold. In the future when things open up again, we definitely plan to incorporate a virtual aspect to our live events.”

The by-invitation only event will host a panel featuring the top names and rising stars of the global content industry, including:

Anna Fishbeyn, Founder and President of XOFeminist Productions and Anteriya Films, is an award-winning star of stage and screen, a filmmaker, director, author and actress. She has a passion for the betterment of women in society and has shaped her work to drive gender equality.

Her movie Galaxy 360: A Woman’s Playground, which she wrote, directed and starred in, will be released in theaters and on major streaming services this year. The pre-release version of the film screened to a packed house at the Cannes and Big Apple film festivals and was a finalist of the Sundance New Frontier Exhibition.

Anna’s first play Sex in Mommyville premiered in New York City and was recommended by Bloomberg News, while CBS Radio pronounced her “a comic genius.” Her second play My Stubborn Tongue played off-Broadway at NYC’s New Ohio Theatre and went on tour to the West End in London at the Soho Theatre.  Her solo cabaret show at the Metropolitan Room in NYC Anna on Fire and Uncensored was recommended by CBS News New York, Jewish Week, and NiteLife NYC.

Anna wrote and starred in the Web series Happy Hour Feminism, which won awards for leading actress, best screenplay, best web series, best short comedy, best musical parody, and has been selected at over 17 festivals. She directed and starred in Invisible Alice, a short musical film that won best musical at the Action on Film Festival in Las Vegas, best director at the International Film Festival Milan, and best actress and best director at the Moscow Independent Film Festival.

Anna’s critically acclaimed first novel The Matrimonial Flirtations of Emma Kaulfield earned her comparisons to Tolstoy, Austen and Nabokov, and is available on Amazon and at Barnes and Noble.

Pre-production has begun on her next movie How To Seduce Your Dinner Guest, as well as two optioned pilots for television, the comedy Healthy Nuts and the drama Infidelity Club.

Eva Lanska is a London-based director and screenwriter. After graduating from the London Film Academy, Eva has focused on producing both documentary and fiction films. She has directed several award-winning films recognized throughout Europe and America.

Across her films, Eva studies the concepts of acceptance and love in challenging circumstances. She poses pressing questions to direct her audience to reflect on the choices to be made, putting themselves in the shoes of her protagonists.

Her previous film, Little French Fish, starring British actors Jonas Khan and Devora Wilde, draws attention to the global stigma against interracial marriages through the relationship of an Orthodox Jewish woman and a Muslim man.  In 2020, Little French Fish was selected by one of the world’s oldest and largest Jewish festivals, the Washington Jewish Film Festival. Her previous picture Okay, Mum, won Best Picture at the Los Angeles Film Festival and was selected for the Short Film Corner at the 2017 Cannes Film Festival. She recently announced her first feature I Am Not An Actress, inspired by the philosophy of Brigitte Bardot.

Prior to setting up a production company, Christina worked at such prestigious companies as Arad Productions (The Amazing Spiderman), Exclusive Media (Rush, Ides of March), in distribution at ZDF-Enterprises, where she has developed numerous projects with Michael Hirst (Vikings) and William J. MacDonald (Rome). Most recently, she was an executive at the European network Sky, acquiring new projects for development.

Since starting MWE, she has produced a number of documentaries and TV shows for the international market and is currently finishing her anticipated six-part documentary series Wonder Women where we meet young women leaders in underrepresented industries around the world who are redefining leadership for a better future. The series will premiere this summer at the 10th Anniversary of “Kat Kramer’s Films That Change The World.” The theme for this year’s event is “Sheroes For Change.”

Eileen Tasca is managing director of Alien Films and Task Films, a production whose co-shareholder is legendary Polish film director, Jerzy Skolimowski. In 2015, she was executive producer of Skolimowski’s 11 Minutes that premiered at the 2015 Venice Film Festival. The film won top prize at the Lisbon Film Festival and was selected as Poland’s entry for foreign language film for the 2016 Academy Awards. In 2010, she co-financed Essential Killing, also directed by Skolimowski, that garnered numerous awards at the Venice Film Festival. Working again with Skolimowski, she currently is executive producing the film Baltazar, a parable focused on the life of a simple donkey, set against the backdrop of today’s maddening reality.

Previously, she worked in venture capital at Citicorp and as a journalist for Variety and several other trade publications.  She is a member of the International Academy of the Television Arts and Sciences.

Award-winning British filmmaker Kate Rees Davies will moderate the hour-long panel.  Kate is a prize-winning director with experience in narrative features, short film, music videos and commercials. Kate’s feature Altered Perception, starring Jon Huertas (Castle, This is Us), is currently streaming on Amazon and was nominated for a DGA Newcomers Award in 2019.

She directed six short films that were screened at the Cannes Film Festival Short Film Corner, several of which were picked up for distribution. Recently, she was the shadowing director on Amazon’s Transparent where she was mentored by Jill Soloway. Kate has a few TV shows in development – an eight-part mini-series about the last six months of Marilyn Monroe’s life and a period drama based on the life of former slave Biddy Mason.

Kate is the founder of the recently launched New Hollywood Collective, an inclusion initiative with workshops that give the members the tools to develop, finance, and produce short form and proof of concept content for next level success. To date, the participants’ films of the program have been accepted into ten major film festivals. Kate also teaches directing at UCLA and serves on the board of several organizations, including NAMIC So Cal. She is a strong advocate for creating more opportunities for women and underrepresented communities within the entertainment industry, and curated and moderated the 2017 AFM panel “The Future is Female,” featuring Geena Davis.