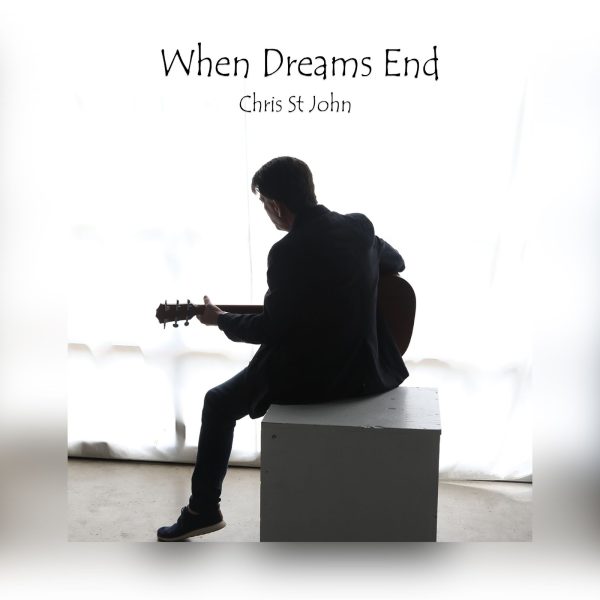 Chris St. John’s third full-length album in less than two years, When Dreams End, might mark the point when cooler heads advise the talented singer/songwriter to take a break and let his creative center replenish itself. It isn’t the case, however. The eight tracks included in the new collection are just as vibrant, lived-in, and full of melodic depth as their predecessors and there’s no hesitation in St. John’s songwriting approach – he’s tackling the same worthy subject matter with this album that he did with the first two.

It does fall into a bit of a trap, however, regarding its musical arrangements. There are slight tempo variations present during the course of the album but the majority of When Dreams End’s eight songs rely on essentially the same musical template with minor tweaks along the way. He leads with the single “Lost Without Your Love” and it is an outstanding musical and lyrical invocation of longing. He’s supplied with stylish, even elegant, accompaniment each step of the way and the spot-on development of the song makes this a near-flawless beginning.

“Oh Papa” raises the bar even higher. It’s a song that will cut deep for anyone who has experienced a complex relationship with their father, but it doesn’t serve up sentiments tied up with a neat little bow and trite would-be solutions aren’t available. It’s as honest as a heart attack and you really can’t expect anything more. St. John isn’t bashful about employing traditional Americana/country instrumentation such as fiddle and other staples/ The presence of strings in this track deepens the melancholy in the song’s heart.

“What’s Wrong with Me” leaves its mark on listeners through accumulation. It starts with a light-footed acoustic guitar jangle and gathers momentum as it progresses before reaching a full-on sweep. St. John isn’t afraid to share the vocal duties with other talented singers and the backing vocals during this song are especially affecting. The title song has a gentle and reassuring touch despite its dire title. It’s during numbers like this when St. John sounds to my ears much more like a well-polished folk singer/songwriter rather than a pop country artist or whatever other labels you slap on him. The fundamentals are far more than skin-deep.

The smoky exoticism of “Her Name Was Lily” doesn’t strike me as cheap. There are great pains taken here to temper the arrangement and it pays off because when the theatrically minded musical swells hit, they mean all that much more. It conveys an experience ripped from St. John’s life and he does a first-class job of capturing the right details to help make the song live for listeners.

I believe “Bitter Tears”, the album’s final track, is the ideal ending for this release. It brings together the traditional slant of such music into a seamless accord with commercial twists and doesn’t leave you feeling manipulated hearing it. All great songs should suspend disbelief for the listener and that happens here for me. Chris St. John is casting a very deliberate spell with When Dreams End and succeeds by any artistic metric.