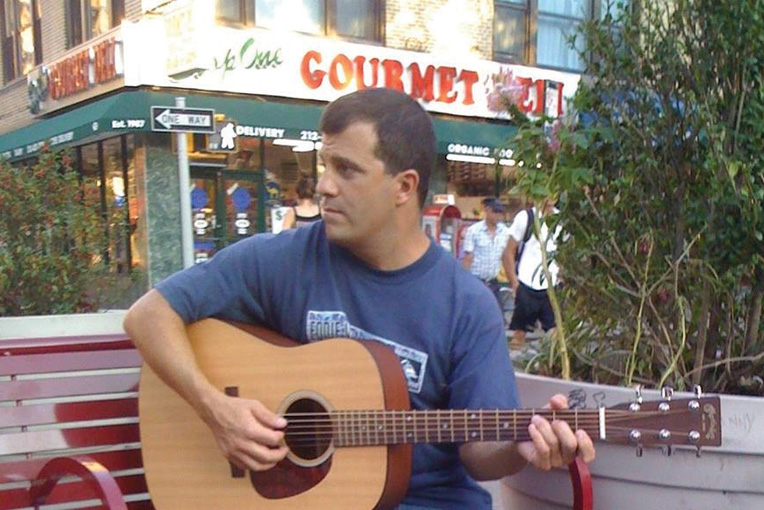 “We sit around and do nothing and see the same bright colors as these walls inside.”

That’s the chorus to the highly enjoyable pop rock song “Bright Colors” from Liquid Phase. Led by singer and songwriter Joe Coss, the Long Island based rock outfit starts out softer with acoustic guitars before a myriad of musical layering unfolds to an infectious tune.

According to the band’s press release on “Bright Colors” the song is inspired from Coss’ commute from Long Island to downtown New York City “to work as the Lead Mechanical Engineer on the new World Trade Center.” Knowing this story background didn’t bias my interpretation of the song. It definitely makes my own thoughts seem way off! The chorus made me immediately feel like the song is talking about being stuck inside an office all day, with windows or landscape paintings to improve work production or give an artistic punch to a blank wall. The idea that office workers should be enjoying some fresh air – we weren’t made to stay inside. Referring back to the idea, the journey Cross puts to song, the connection and the meaning just feels so refreshing. Imagine being so high in the sky, living among the skyscrapers and feeling like a speck. We’re really doing nothing compared to the beauty that Mother Nature provides every day. Cross nails the positivity and optimism felt in this city, in this world. It’s about finding beauty in every day life.

I like the journey the instruments take in “Bright Colors” too. The acoustic guitars unfolds into stronger riffs, with tickling piano keys peppering around the music bed. The percussion, interesting enough for a song that reflects a city, isn’t as strong. It’s evident and it’s felt, but the pulse of this song really relies on Coss’ perfectly pop-styled chorus and snazzy guitar work. Some songs sound very New York or very rural. “Bright Colors” sounds like it should. It’s a place in our minds. It’s not one place specifically. Coss’ voice is made for pop music. At one point, I thought the song was going to go in a different direction (maybe even something like “Waiting For That Day” by George Michael). Coss and his band have an essence to them that is refreshingly simplistic and authentic. His voice is warm and clear. You can hear every word he’s singing and he’s not trying to be anything he’s not. That’s true artistry.

The chorus is a bit relentless, but what pop song isn’t! I think that’s what makes this song so enjoyable is the callback and the rhythm. Besides if Panic At The Disco’s “Hey, Look Ma I Made It” can become an earworm, so can the fantastic, upbeat “Bright Colors.”

Overall, “Bright Colors” is a bright spot on some pretty dark and dreary music collections out there. It’s worth a listen and there’s still time to get it added to your 2019 Spotify playlist. It’s one of those songs that gets you ready for the day and is just a feel-good moment. Fans of pop music will dig this one.