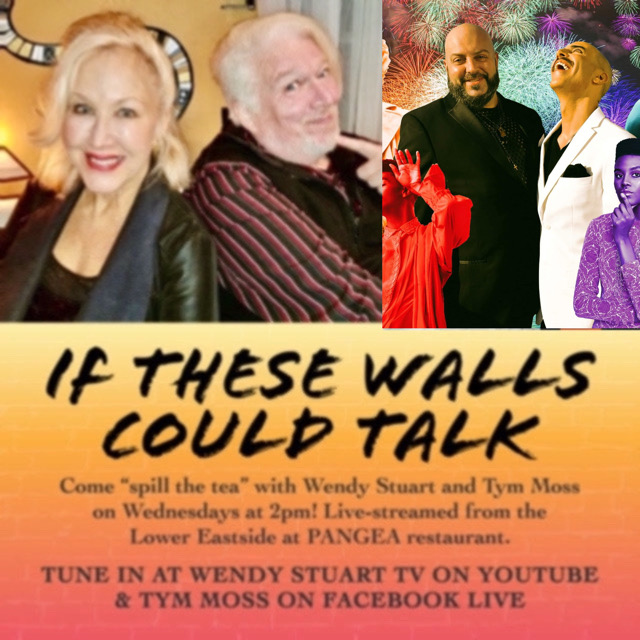 Van Hechter and Chauncey Dandridge will be featured guests on “If These Walls Could Talk” with hosts Wendy Stuart and Tym Moss on Wednesday, August 11th, 2021 at 2 PM ET live from the infamous Pangea Restaurant.

Born French-Georgian, Van Hechter is a pop artist with an edge; he is funny, cutting, at times political, yet his tracks are catchy and always easy to dance to… — He grew up between Canada, France and the U.S.A… He studied opera, literature and cinema in college, then dropped everything to sing in a punk band… — ”But that was a million years ago”- as he says. These days, with a solo album in full swing– ”Love Elastic” he has 3 singles charting in the US underground; ”I Believe”, ”I Am” and ”Love Elastic” he is busy launching a disco duet with Stonewall Inn resident Dj Chauncey Dandridge, entitled ”The Delight”. The song’s ultra-glistzy video is getting a lot of positive attention  as it portrays ”coolness at every age”… Americans seem to be delighted by ”The Delight” !!

Chauncey Dandridge is a DJ, event producer, activist, author, poet and all around trouble gardener just to name a few,

As DJ Chauncey D, he has been a sound selector for just about every gay bar in the city throughout his 18 plus year career from The East Village to The West Village and beyond from Rockbar to Nowhere. He has provided the soundscape for The Urban Bear Street Fair and Folsom Street East as well as hosting his annual Madonna Worship Night celebrating its 13th year!  He actually took his infamous All Madonna themed party to Lisbon in 2020!  Chauncey has enjoyed a residency for almost eight years at the legendary Stonewall Inn as in-house tech and dj for drag shows, cabaret performances, parties and more. Throughout the years he has lent his talents to countless fundraisers and causes and is one of the producers of the annual New York Dance Parade and Festival each May.

Chauncey is a poet as well and has recently published two volumes of his anthology “Something Tsunami” available on Amazon.   The third and final volume should be released by the end of the year.

Currently, he is in the midst of releasing original music with Montreal based pop star Van Hechter.  Their current duet single “The Delight” has been garnering some great press and attention around the world.

Watch Van Hechter and Chauncey Dandridge on “If These Walls Could Talk” with hosts Wendy Stuart and Tym Moss on Youtube here: