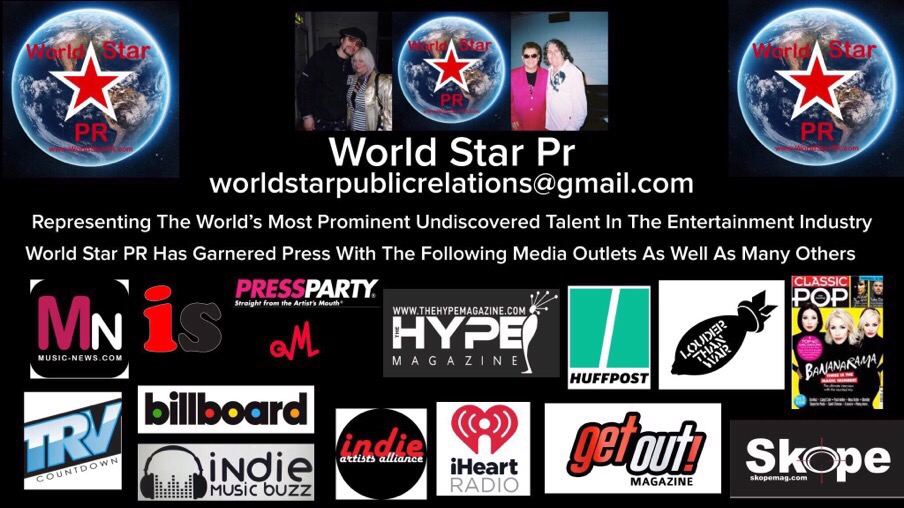 Although I’m normally accustomed to reviewing an actual artist about his craft, I’ve often wondered what goes on behind the scenes and the efforts that go into promoting a talent. After speaking to some of the larger publicity companies, I came across World Star PR. It had come to my attention through one of their artists that they were achieving miraculous results. Often referred to by their clients as their secret weapon on the road to fame, I spoke with Eileen Shapiro, an award-winning writer who currently writes for over 25 publications and Jimmy Star, the host of “The Jimmy Star Show with Ron Russell”, the biggest web Television/Radio show in the world, having 4.5 million weekly viewers/listeners, about their methods and secrets on the rise to stardom.

Both of you are quite successful in your separate careers. What motivated you to take on the responsibility of a PR company?

Eileen: Through years of interviewing so many artists I’ve made a massive amount of contacts and I’ve learned from the various PR representatives what works and what doesn’t. Most of the PR companies that I’ve worked with, and still do are awesome, however some tend to be a little pricey. Don’t get me wrong the money that they earn is well deserved, they have a difficult job, but not everyone can afford the prices of high end publicity. Jimmy and I love what we are doing. Both of us would work 24 hours a day if we could, but neither of us were getting paid for our efforts. We decided that between both of our skills and contacts, why not represent our own clients for a small amount of money so that some of these indie artists might have a chance for notoriety, and so we could eat and continue to do what we love.

Jimmy: World Star is the Go-To alternative for musicians, actors, authors, comedians, filmmakers, models, and other entertainment professionals. We have a great reach, great industry relations and work diligently to get results. Separately we are powerful with our separate skills, but together we are deadly, in the best way possible.

Jimmy: I concentrate mainly on twitter where I have 1.2 million followers that I’ve established through the past thirteen years. One of our aims is to build our client’s social media, reverbnation, and whatever else it takes to get the artists known. We offer social media training as part of our services.

Which are some of the publications your clients can expect to be seen in?

Eileen: Aside from getting a spot on Jimmy and Ron’s show, which is an epiphany in itself and has caused our clients to get thousands of views on their videos and releases, I write for Huff Post, Louder Than War, ( a UK publication that happens to be one number #41 in the top hundred most influential pop culture and music magazines in the entire world), BuzzFeed, Get Out Magazine, ( the only gay magazine left in print in New York City), PureM Magazine, ( an internet and print magazine based in Ireland), Indie Source Magazine, Scope, Vents, Classic Pop, ( a popular print magazine based in the UK), and I can go on and on. Jimmy also lets me write for his blog, “Jimmy Stars World”, which is viewed by half a million people a week.

Between the two of you, whom have you interviewed?

Statistically wise, what kind of results are you getting?

Jimmy: We achieve amazing results for our clients. We have reached #1 globally on Reverbnation, gotten hundreds of thousands of views on Youtube, increased social media followings, artist placements in the biggest publications in the world, the list is endless.

I understand that occasionally book your clients shows both in New York City and in the UK.

Eileen: Although it’s not in our job description we have arranged gigs for some of our clients in both New York as well as the UK.

Would you like to give a shout out to some of your clients, past or present?

We treasure all of our clients, and use no contracts to bind them, some leave us Oporto a while when they have nothing special going on and some are on-going. So hello American High, a fabulous band from California who donate their profits to food banks, Sluka, an amazing artist who aside from singing, writing and producing some of the best music ever, he’s a multi-instrumentalist, airplane pilot with jet status, long distance runner and a world famous painter, Ricky Rebel, who is currently charting on top 40 Billboard, has toured with Brittney Spears, danced with Michael Jackson, and was on Madonna’s record label, Revolushn, a Psych band including the drummer from Devo, Aaron Paul, former lead singer of the huge boy band Worlds Apart, Orlando Draven from Zeistencroix, an industrial metal master, Matt Davis, a soulful New York based singer/songwriter, Ike Avelli, an openly out hysterical comedian, The FMs, a super popular New York based goth band who wants to save the world without being dicks, Jackie Dupree, a New York City based drag queen who also happened to play football, Sharon Lia, an amazing alt rock singer who happens to on the Grammy committee, Saskia Vese, a British Country singer, Free Willy, who was number one globally on reverb nation, Captain of the Lost Waves, a modern vaudevillian who is actually an alien, and we want to welcome Paisley Fields, a queer country group.

We would like to invite anyone to give us a try for a month, and see what happens ….

Potential clients can email us at worldstarpublicrelations@gmail.com or on our website at www.worldstarpr.com