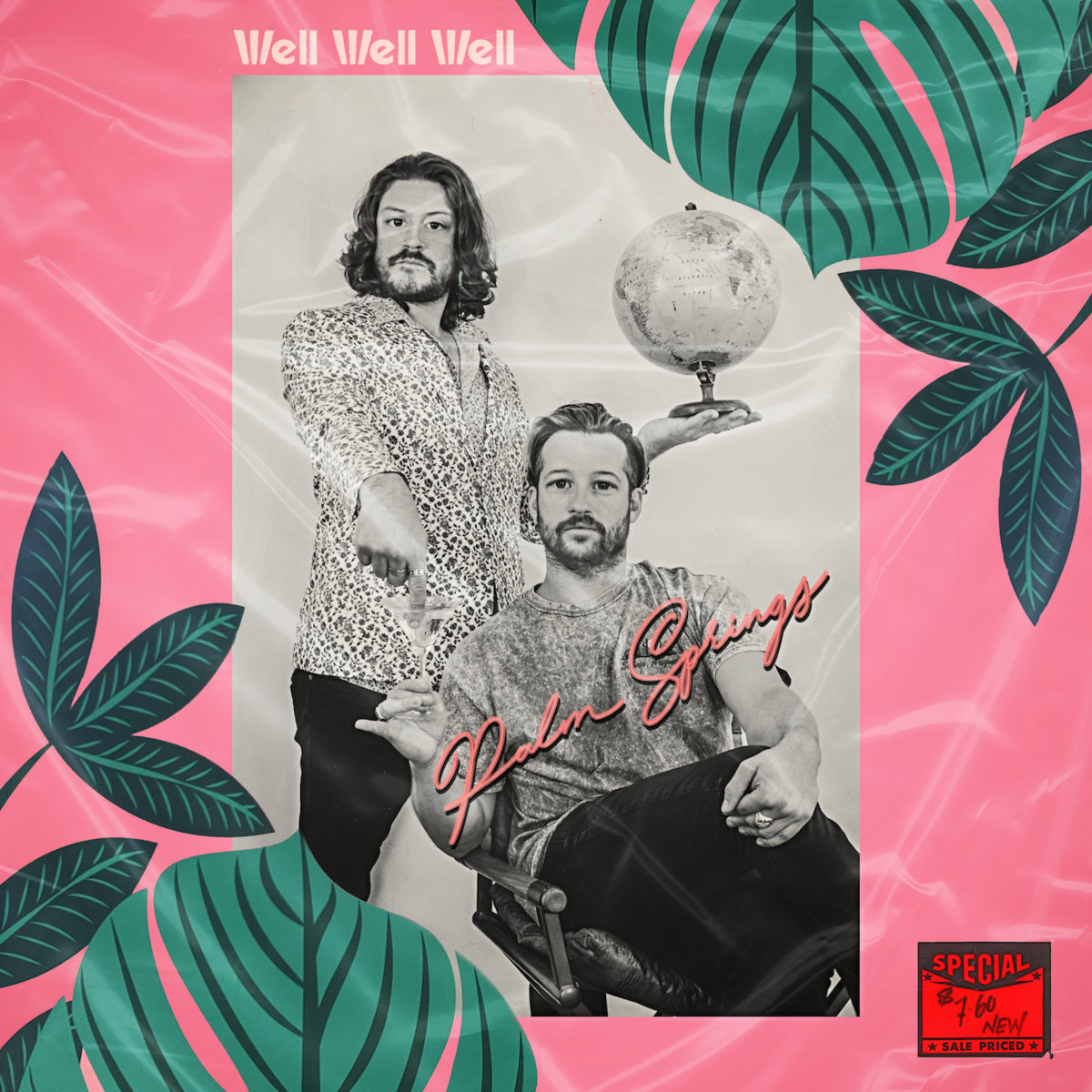 Well Well Well’s new album Palm Springs continues pushing the textual envelope as it has on the band’s past projects. The San Diego-based band’s nine-track collection, produced by West Coast surf scene mainstay The Mattison 2, stands out even amongst Well Well Well’s excellent body of work for multiple reasons. One of the chief factors is how the respective styles of songwriters Dan Nichol and Seton Edgerton collide with The Mattison 2’s production and playing contributions with impressive results.

The opener is dizzying. “What’s Wrong With You?” weaves a dazzling musical texture of heavily processed wah-wah guitar whiplashing listeners before segueing into an urgent prog-funk workout. Well Well Well’s vocals are initially submerged in a morass of post-production effects but gradually surface as the song progresses. The contrast between its initial promise and what it soon offers is one of many stunners. One thing is certain coming out of the opener – Well Well Well are extravagantly talented and demanded repeated listens before you fully grasp what they’re attempting.

The soulful inclinations present in the opener are much more dominant in the second song. “Modern Times” has immaculate multi-part vocal harmonies leading the way much of the track and the falsetto touches are especially potent. There’s far less of a stylistic mash-up occurring with this track, but it’s nonetheless every bit as effective in its own right. We’re back with hard-hitting music for the album’s title track. The band’s fleet-footed creativity, however, isn’t content with standing still and the restless shifts are never anything less than coherent. No one can deny their sharp orchestral sensibilities.

“July Til’ June” begins as decidedly darker than any of its predecessors. We’ve heard hints of that intensity gnawing around the edges of many earlier songs, but Well Well Well soon pushes it away. The band segues into a bouncy mid-tempo bounce for another of their impressionistic yet sharp lyrics. The Beach Boys’ influence on the band’s music is impossible to ignore, though it never manifests itself as anything resembling outright imitation. “TV Guide” has a dream-like psychedelic tilt, never too pronounced, and the exquisite guitar work is one of its highlights. You can’t say enough about the band’s vocal arrangements, but “TV Guide” has one of the album’s best.

The Mattison 2’s jazzy influences insinuate their way into the album finale “On Your Own”. Some listeners will hear a lot of Dark Side of the Moon era Floyd here, as well, but the musicianship is cut from finer overall cloth. The bass playing is a strong point of the album, and it reaches its zenith here with its pivotal role in how the song unfolds. Acoustic guitar, however, is what you’ll remember from the song’s closing moments as its jangle puts a final touch on the cut. Well Well Well are no strangers to praise, but their collaboration with The Mattison 2 has produced one of their most fully realized and inspired statements yet. It will grow on you with each new listen and should satisfy anyone who values imaginative and outside-the-box music.