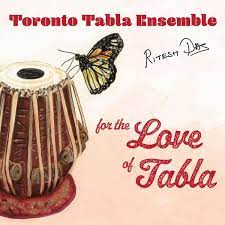 Toronto Tabla Ensemble – For The Love Of Tabla

For The Love Of Tabla is Toronto Tabla Ensemble’s groundbreaking eighth studio album. Founder and artistic director, Ritesh Das, wanted to put the tabla front and center on For The Love Of Tabla, knowing it had a tendency to get lost amongst other instruments. For The Love Of Tabla marked many firsts for Toronto Tabla Ensemble, it was recorded remotely (due to the pandemic), the tabla was mixed to remain prominent, and they explored themes of love and devotion for the first time. While there were technical challenges, Das and his collaborators (who are all over the world) created a flawless and captivating album.

Das’s goal is to take the essence of classical North Indian music and blend that with other musical styles. His goal was to bring the tabla to all kinds of music, showcasing its versatile nature. For The Love Of Tabla highlights Das’s goals throughout its 11 tracks. Songs like “Prayer For The Mother” and “Jovano Jovanke” show the tabla’s range. Whether the tabla takes on a deep and robust role or a lighthearted and fast-paced role, depends on what’s needed. The point is, the tabla can go there if its what the song requires. “Jovano Jovanke” is an Eastern European love song that features the tabla in a more carefree role. “Prayer For The Mother” has a different make up entirely, it features singer Bif Naked singing haunting lyrics while gentle electric guitars echo her. The tabla feels like the heartbeat of “Prayer For The Mother,” the effect makes you blood swell.

As you listen to For The Love Of Tabla, there’s no question that the tabla can do anything. Whether its enigmatic sound is lending itself to a rising tempo or if its keeping you on the edge of your seat with a slow beat, it always transports you. Opener, “Encore 21,” instantly thrusts listeners into the power of the tabla. Das performs jaw-dropping polyrhythmic vocals in unison with the tabla, something you have to hear to believe. “Baya Works” is an instrumental song that grabs listeners the moment you hear the beat of the tabla. By bringing the tabla to the forefront on, For The Love Of Tabla, every song instantly enchants you. Once you hear the tabla, it’s takes you on a journey, only bringing you back down to earth when its done.

For The Love Of Tabla has an incredible amount of collaborators from all over the world coming together to make music like nothing else out there. Whether the tabla is being paired with the human voice, sitar, violin, or taiko drums something magical happens. “Taiko Crush” puts the tabla and taiko drums together in an energized percussive jam session. These two percussive instruments have a hypnotizing effect when played together. As you get lost in the depths of drumming, you realize you could have listened to hours of it. For The Love Of Tabla is deeply meditative in that way, I could listen to every song for hours. In instrumental masterpiece, “Burning Sky,” there is so much to hear and to feel, that you feel like you’re exploring the song as well as listening to it. Its only when the tabla releases you, that you come out of whatever spell it had you under.