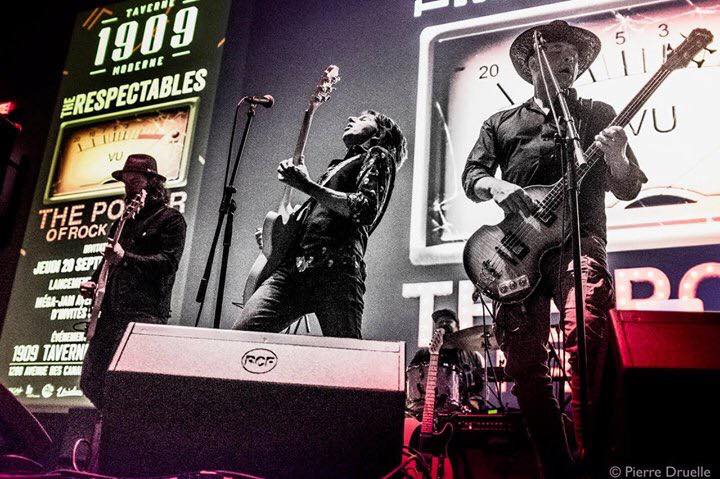 The Respectables release The Power of Rock and Roll

Canadian rock bands have a wont for capturing the spirit of American rock and roll as well as many of their US bred peers. The Respectables is no exception. Their album release The Power of Rock and Roll, produced by longtime Rolling Stones collaborator Bernard Fowler, is the latest studio collection from a near three decade long run. Their multi-year success story has taken them to the heights of the Canadian music world but has likewise landed the band plum gigs throughout the world and even an opening slot for The Rolling Stones at the Montreal concert of their 2003 Forty Licks world tour.

The title track from the album is an excellent choice for a single. “The Power of Rock ‘n’ Roll” obviously plays some to cliché, but the four piece reinvigorates classic rock language with rambunctious individuality. Renowned guitarist Waddy Watchel guests on the track and his long history playing alongside some of the genre’s epical talents like Warren Zevon and Keith Richards, among others, serves the track well without ever dominating the performance. It culls its sound from a traditional blues rock slant with a number of vamps and flourishes scattered throughout the track. The Respectables are well-honed hands at this – it is apparent from the first – but the multitude of similarities with other tracks of this ilk never means the band indulges in outright imitation.

The track has a soulful but clean guitar sound and Watchel’s lead playing packs plenty of sting without ever overdoing things. It has a rhythm section with genuine swing while still possessing a muscular touch capable of setting an authoritative tone for the performance. Fowler’s production work shaping the song keeps it balanced without ever concentrating its sonic strength in one particular area and his discerning ear serves the band well. This song, ultimately, is about a tried and true subject, the redemptive qualities of rock music, and every aspect of the performance sparkles with that inspiration.

The vocals back that up all the way. There’s real passion for the material that comes through in each line of the track and the chorus pays off for the listener in a big way. Few listeners if any will doubt the conviction running through this single; it isn’t the premeditated result of a band pandering to their audience, it is instead a honest and joyous expression of a band relishing what their creative powers can accomplish. The Respectables prove almost thirty days after they first formed that they can still bring the same enthusiasm and energy to your music three decades on that first inspired them to pick up an instrument and sing.

The accompanying video for “The Power of Rock ‘n’ Roll” gives viewers some idea of the physical nature the band bring to their stage show and demonstrates the same no frills approach characterizing the performance. The Respectables are responsible for some of the purest rock music recorded over the last three decades and their single “The Power of Rock ‘n’ Roll” brims with undeniable spirit.