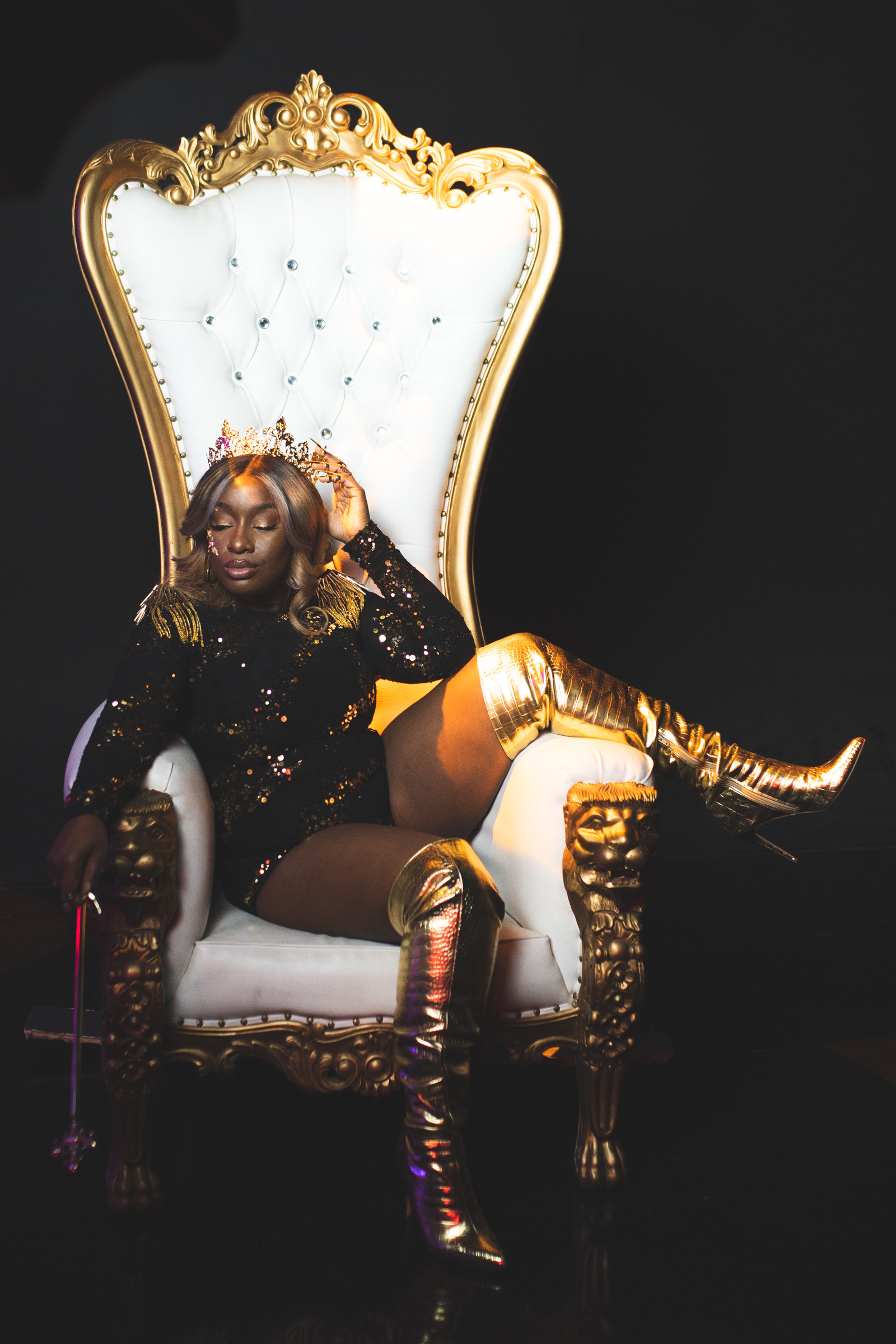 The passion within: EUGEE is ready to make a fierce impact into the Pop/ R&B scene

As a New Orleans native, EUGEE brings us a flare of jazz, soul, rock, pop and R&B tones to her music. EUGEE has been songwriting since the age of 14. She took her talents to the stage in 2003 at age of 16 under the name “Ugorji” and embraced the Rock n’ Soul genre with a backing band she formulated with her classmate, Sam Craft (of “Sweet Crude” and “Alexis and the Samurai”) and their friends from high school. Their popularity grew quickly around New Orleans, packing their performance venues however, Hurricane Katrina had other plans for them.

After her Great Migration to Chicago for college, she re-emerged on the Dance-Pop music scene in 2008 under the moniker “EUGEE”, making waves around town with PartyTime2000 a.k.a Simoneaux (another friend and college classmate from New Orleans) who produced eclectic beats that paired perfectly with EUGEE’s unique voice.

In 2011, EUGEE embarked on a journey to medical school, receiving her Doctor of Medicine degree in 2015 and completing her residency in Internal Medicine in 2018 at LSU-Health Sciences Center in Shreveport, LA. She is now a practicing physician of outpatient Internal Medicine as well as Lifestyle/Culinary Medicine and will also be completing a fellowship in Sleep Medicine in June 2021.

Despite that detour, a decade later, EUGEE is back with a new Pop & RnB sound that continues to showcase her poignant, storytelling lyrics.

Serving sassy soulful vocal spanning across multiple genres for almost 2 decades now, EUGEE is highly sought for concerts and amazes the crowd with live performances and her ability to cover original and cover songs. There is no surprise that EUGEE has won many contests for her vocal abilities and is primed for a huge 2021 year!

HD: Wow, you are an M.D. and also wanting to pursue your music career. Talk to me about what prompted you to be a musician?

EUGEE: Music is actually something I fell in love with at an early age. Growing up as a Nigerian-American, the focus in my household was Education so my mom did not allow me to have friends over often as school was the priority. I remember spending many days in my room studying and reading that music became a world that allowed me to daydream of becoming a Pop Star.

HD: Oh wow, so you seen yourself as a Pop Star at an early age?

EUGEE: Yes, I did! I grew up constantly listening to the radio and would picture myself as if I was the Pop Star on the radio. I grew up in the era of Britney Spears and Christina Aguilera and was heavily influenced by the Pop Culture of the 90’s and 2000’s. I remember telling myself wow, Britney Spears came from Kentwood, LA which was close to my home, so it made me feel that one day I could also be a recognized talent from Louisiana too!
Shortly after, Christina Aguilera made her way onto the music scene and I was determined to be just like her: I learned every single note of her debut CD…except I couldn’t sing like her. Here I was, “stuck” with this Alto-2 voice that could sometimes pass for Tenor. Because of my perceived shortfall regarding my vocal talents, I decided to focus on writing lyrics instead which came easy since I was already writing poetry. I figured, maybe I could make these songs sound good in my deep voice or maybe get
someone else to sing them.

HD: So, when did you decide to pursue music?

EUGEE: At the end of my sophomore year, I started collaborating with my friend SamCraft (of Sweet Crude) who sat behind me in English class. He was a violinist who was attending NOCCA (the premiere art school in New Orleans) and he needed someone to test out his new accompaniment skills. With his guitar skills and my sultry voice combined, we were an extremely talented force that no one could deny. Our popularity grew around town and we added other musicians to our group, eventually becoming
“Ugorji” (my first name). After recording our debut EP in the summer of 2006, we had high hopes—until Hurricane Katrina came to pass.

EUGEE: I moved on to Chicago and attended college at Loyola University-Chicago, completing my Bachelor of Science degree in Biology—because if you remember, I’m Nigerian and Education always came first! That didn’t stop me though from delving into music on the weekends with another New Orleanian friend, Nick Simoneaux (affectionately known around town as “PartyTime 2000”) who was also attending Loyola University-Chicago. He was more into the electronica/dance genre, which brought out another side of me—a dance-pop persona that I named “EUGEE.” We had fun and
played the college party circuits in Chicago and I also sat in as a singer for some Jazz bands in Chicago on Monday nights. It was during this time that I decided that I was going to take a real shot at being a singer full time after graduating from college. Up until this time, my mother had allowed me to sing on the side as a hobby, but I planned on proving that I could really do this as a full-time career. I did graduate from Loyola University-Chicago with honors, but I purposefully didn’t take the MCAT during my
senior year because I wasn’t planning to go to Medical School like I was “supposed to.”

So, your original plan was not to attend Medical School?

EUGEE: I continued to chomp at the bit, collaborating with local music producers in Chicago, but nothing was hitting quite right. I was working at The Cheesecake Factory to make ends meet but I was barely making $70 a week. I realized that I probably wasn’t going to make it out on my own for long, so I decided to go back to the original plan of going to Medical School. I applied far and wide and got accepted to Ross University which seemed like dream because it required me to complete my first 16 months of medical education on the island of Dominica in the Caribbean before
returning to the U.S. to finish my clinicals. Move to a land with sandy beaches, beautiful blue seas and constant sunshine? “Sign me up!” I thought excitedly. Off I went to Medical School and left my dream of being a singer behind. In my mind, it was my fault it didn’t work out, so I had to face the consequences of that. I pushed all my musical accomplishments to the back of my mind and focused on medical school; I did well. I graduated with Magna Cum Laude honors in 2015 and moved back to Louisiana to complete my Residency in Internal Medicine. My life seemed to be on
track. In the past, people had always come up to me after shows and told me I was “healing [their] heart with my voice,” so instead of healing with my voice, I was going to heal people with my hands and knowledge now, right? I graduated from my Residency program in June 2018 and went on to become an Attending Physician and Assistant Professor of Internal Medicine at the program I completed my Residency in. Becoming more confident in my medical talents and ability to make a difference in a community where many black female physicians aren’t seen, I went on to complete my board certification in Lifestyle Medicine and began developing a Culinary Medicine course with a fellow colleague to educate the medical students at our institution. Shortly after, I was offered a prestigious position in a pilot program for a Sleep Medicine fellowship which I accepted (and will be completing in June 2021).

HD: After residency, what made you go back to pursue music?

EUGEE: I found myself being overwhelmed and turned to music to help me rebalance, that’s when I became completely committed to it being a part of my life again. Never again would I throw it to the side and pretend that it wasn’t my entire essence. Music has saved my life time and time again: the process of writing a song, recording it and/or performing it is a form of healing for me. It’s the only way I can truly process things; it is
such a beautiful experience. And based on the amount of people who tell me that my music is a “vibe” or that it reminded them of a situation they had also faced, I know that it’s helping others to heal, too.

HD: What has been your biggest discovery of your dual careers?

EUGEE: In this new era of my life where both my Medical career and my singing career co-exist, I have come to accept my many talents. I can do both at the same time, contrary to what I erroneously believed. I don’t have to choose between the two—I can have it all. Through this realization, I’ve discovered that not only am I healing people with my medical knowledge and my voice, I’m inspiring them too. I’ve received countless messages from both people I know and those I have never met that tell me that seeing me pursue both Medicine and Music at the same time has inspired them to
put more serious effort into their own hobby of interest alongside their primary job that pays their bills. That lets me know I’m on the right path…and so I plan on continuing to do just that.

HD: Talk to me about your single “On My Own” and what does it mean to you?

EUGEE: My latest single “On My Own” is definitely about a woman being confident in her own skin, knowing her worth, and not settling for anything in life. I feel it is important for women to empower themselves with their careers, education, financial and overall well-being and to never let anyone stop them from succeeding!

HD: Wow, this has been such an inspirational interview Dr. Okorie, thank you very much for your time!

EUGEE: Thank you for having me!