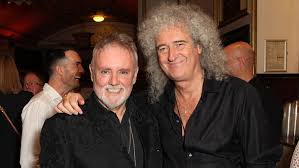 Queen’s Brian May and Roger Taylor could not contain their excitement after their biopic Bohemian Rhapsody won big at the Golden Globe Awards.

At Sunday’s ceremony, the film charting the band and their frontman Freddie Mercury’s lives and careers was named Best Motion Picture – Drama, while its star Rami Malek was handed the Best Performance by an Actor in a Motion Picture prize for his portrayal of Freddie.

Brian and Roger attended the bash at The Beverly Hilton in Beverly Hills, California and even joined producer Graham King and Rami on stage to accept the top film award.

Celebrating afterwards, the British rockers filled their social media feed with delighted posts thanking the cast who told their story on screen.

The 71-year-old guitarist captioned an Instagram snap of himself celebrating with the film’s star: “Thanks King Rami – you are IT !!! I’m still in shock at walking away with the two top awards of the night. THANK YOU Golden Globes !”

Brian also posted pictures of himself smiling with Lucy Boynton, who plays Freddie’s early girlfriend turned platonic soulmate Mary Austin, who he called the movie’s “unsung heroine” and Gwilym Lee, the actor who played him on screen – who he dubbed his “fantastic new brother”.

The euphoric musician, who was attending his first movie awards show, also posted a snap of him and Roger celebrating with Rami, to which he added: “Great moment! Thanks to all who made this happen.”

The drummer, 69, also expressed his joy on Instagram, adding: “What a night! WOW!”

Bohemian Rhapsody’s shock win wasn’t welcomed by everyone. Its official director Bryan Singer was fired halfway through shooting amid allegations of sexual misconduct, and it had a mixed critical response, prompting some to criticise members of the Hollywood Foreign Press Association’s decision to honour the film at their ceremony.