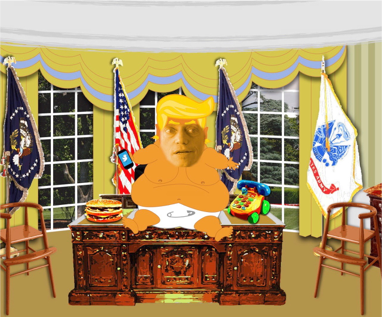 Marc Gordon masterfully developed a comedic music video to voice a clear message for change. While Marc has always shared an interest for politics, he also knew that the best way to have your message heard is not always the most ordinary. Marc is combining his extraordinary talents in comedy, music, and production to create a powerful message for mass visibility, attention, and a need for change. Marc’s mission is to use comedy to create awareness and educate people on the reality of politics and to remove that blindfold when voting. Marc is a strong believer of inspiring change collectively, “we all have to come together in order to make changes.” He is hoping to use his platform much like: Howard Stern, Steven Colbert, Trevor Noah, Seth Meyers, Bill Maher, to name a few.​ We caught up with Marc Gordon and here is what he had to say about Trump, the Republican Party and his new video…

What is your background in music?

One of my favorite activities is listening to live music.  I would to do a comedy rap to close out my stand-up set.  It was my favorite part of the show and loved the reaction of the crowd.  I put on a few comedy/rap shows which always my favorite ones to be a part of.

What lead you to pursue a career in comedy and music?

As far as comedy is concerned ever since I was a kid I was always interested in comedy.  I would visit  My grandparents in the summer in Atlantic City.  They would always take me to see shows.  I would see the legends Don Rickles, Buddy Hackett, Jackie Mason probably not age appropriate but it was eye opening.  As I got older my parents would take me to N.Y.C. to see Broadway shows.  I had this interesting mix of comedy and music that most of my friends didn’t experience.  When I was in summer camp around age 11 me and a friend wrote a sketch called the 6′ o’clock news.  Trying to get laughs in front of a few hundred people.  Once you experience that especially as a kid its eye opening and I know I always wanted to make people laugh.

What inspired you to take the necessary steps to create a song and video about Trump?

I was inspired to make a Trump song because I was disgusted with is taking place in our country.  I was going to a lot of Bernie Sanders events and did a fund raiser where we had comedy and rap.  I just felt that a lot of people who weren’t politically active would come out.  A lot of people don’t want to go to a political rally but if you can entertain people it’s much more effective to reach people who are no politically active to be involved.

What setbacks have you experienced?

I have experienced so many setbacks in my career.  I have to create a lot of shows and financial setbacks are always significant.  It’s getting the budgets to make a project.  I always keep on trying, so many friends gave up and moved out of LA.  This is something I love to do and every time there is a setback I regroup and see how can make a project work.

Who do you look up to?

How will you measure your success on this project?

I would measure success by the amount of people I can reach and hopefully inspire.  Getting positive feedback and hopefully getting people more involved politically.

If you could sit down with Trump what would you ask him?

Wow, great question. If I could sit down with Trump I would ask why does he feel the need to use hate speech to rally up a segment of the population?  Wouldn’t it be more effective to unite people and help the country outside of his base?

What do you feel the biggest misconception is about Trump and his administration?

One of the biggest misconception about Trump is that he is draining the swamp.  He is doing the opposite and the people he claimed to help the most are the ones who he is hurting the most.  Every person in his cabinet is trying to destroy the institution the are supposed to protect.  Be it the EPA, education, finance, housing & judicial.  Literally everything he has done is to benefit the top 1%.  He is running the biggest con the country has ever seen.

Do you feel like the American people are being misled and only by the Republican Party?

The Republican Party is willingly destroying American values and the rule of law.  Trump has conspired with our enemy to win an election.  On top of that he has committed over 10,000 lies and has been involved with laundering Russian and Saudi money for years.  He is compromised and now has an Attorney general more concerned with protecting Trump then the rule of law.  Republicans know this is not acceptable behavior.  They are still going after Hillary Clinton over e-mails so we all know they would be holding impeachment hearings if Hillary was President.  Mitch McConnell is an absolute disgrace and a total hypocrite.

Are most people in Hollywood for or against trump?

Hollywood is overwhelmingly against Trump.  The best part of Hollywood is that it attracts people from all walks of life from all over the world. It is the ultimate melting pot.  Once you work with so many people from various backgrounds you realize the commonality and it really helps unify people.  Trump rallies people with hateful rhetoric.  If you do that in Hollywood you will find it to be a hard place to make it.  That’s why in LA country he lost overwhelmingly.

Can you name three things that Trump has done that has personally cause you grief and/or hardship?

Well I also have a side business where I make paddle boards and electric scooters so his tariffs were crushing.  I have a lot of friends who are affected by hateful rhetoric he has made people feel unsafe and embolden hate speech. I am worried about the future and his attack on the media, free speech and American values in general.  It’s upsetting and anxiety causing.

My video will on my website marcsgordon.com  and also will be on you tube.  The song Diaper Don is also out on all the streaming services!

The video is available for showing.