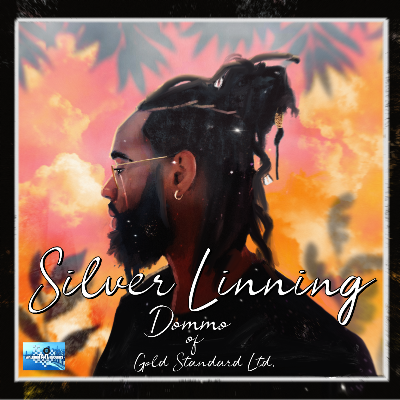 One of the most defining aspects of Dominique Lloyd, aka, Dommo’s character, is his less than charmed upbringing. Growing up in Toledo, OH, it’s been heavily inferred that he was subject to extreme poverty and other rather woeful circumstances. His motivation was his art and his music, as a means of not only escape, but purpose. As a vocalist for Gold Standard LTD, Dommo has made great strides in the world of music. He’s even made time to release some material of his own, while also juggling his role in the group.

“Silver Linings” is the newest single from Dommo, and it feels and sounds like an intensely personal work. An R&B track at the end of the day, this is not your typical sensual fare underlined by a pleading libido. This is an unnervingly vulnerable Dommo, performing with his soul on full display. It’s rare that an artist can get so close to the edge of catharsis, without losing themselves, entirely. Come to think of it, Dommo most likely left an irretrievable piece of himself in the studio where “Silver Linings,” was recorded.

A cauldron of delicate instrumentation and perfectly blended interplay, “Silver Linings” is sure to resonate from your first exposure to it. I’ve been in and around the music industry for decades and I have never heard an arrangement quite like this one. To his credit, Dommo not only weaves in and out of an unorthodox structure, but he steers it, skillfully. There’s a faint sense of Gospel to “Silver Linings,” but the primary agenda seems to be some sort of deep emotional resolution. By song’s end, it seems that Dommo has reached some level of inner peace, even if we haven’t.

From a musical standpoint, “Silver Linings” is driven by a traditional organ sound that compliments Dommo’s delivery, perfectly. A clean and thick stringed guitar opens the piece, which is somewhat comparable to Charles Bradley’s version of Black Sabbath, a few years ago. Instead of raw wounds being reopened though, as on the Bradley cover, Dommo swims upstream in a sea of sensitivity. Even the most impassioned singers, rarely dare to embrace this sort of spiritual nudity. In this case, Dommo’s performance is defined by his daringness and courage to fully offer himself. It’s a remarkable exercise in receptivity, at all costs.

It’s going to sound like hyperbole, but “Silver Linings,” is genuinely a must-listen track. The depths that Dommo goes to on this piece, makes every major ocean seem shallow by comparison. You can almost hear him on the verge of trembling at certain points, but thanks to a self-fulfilling vow not to, he doesn’t. To achieve this sort of gravitas and still have a song that has mass appeal is a virtual paradox. The most promising aspect of all of this is the title of this single. It’s often in the silver linings that we find the answers that had, until then, eluded us for an entire lifetime.

The music of Dommo has been heard all over the world in partnership with the radio plugging services offered by Musik and Film Radio Promotions Division.  Learn more https://musikandfilm.com