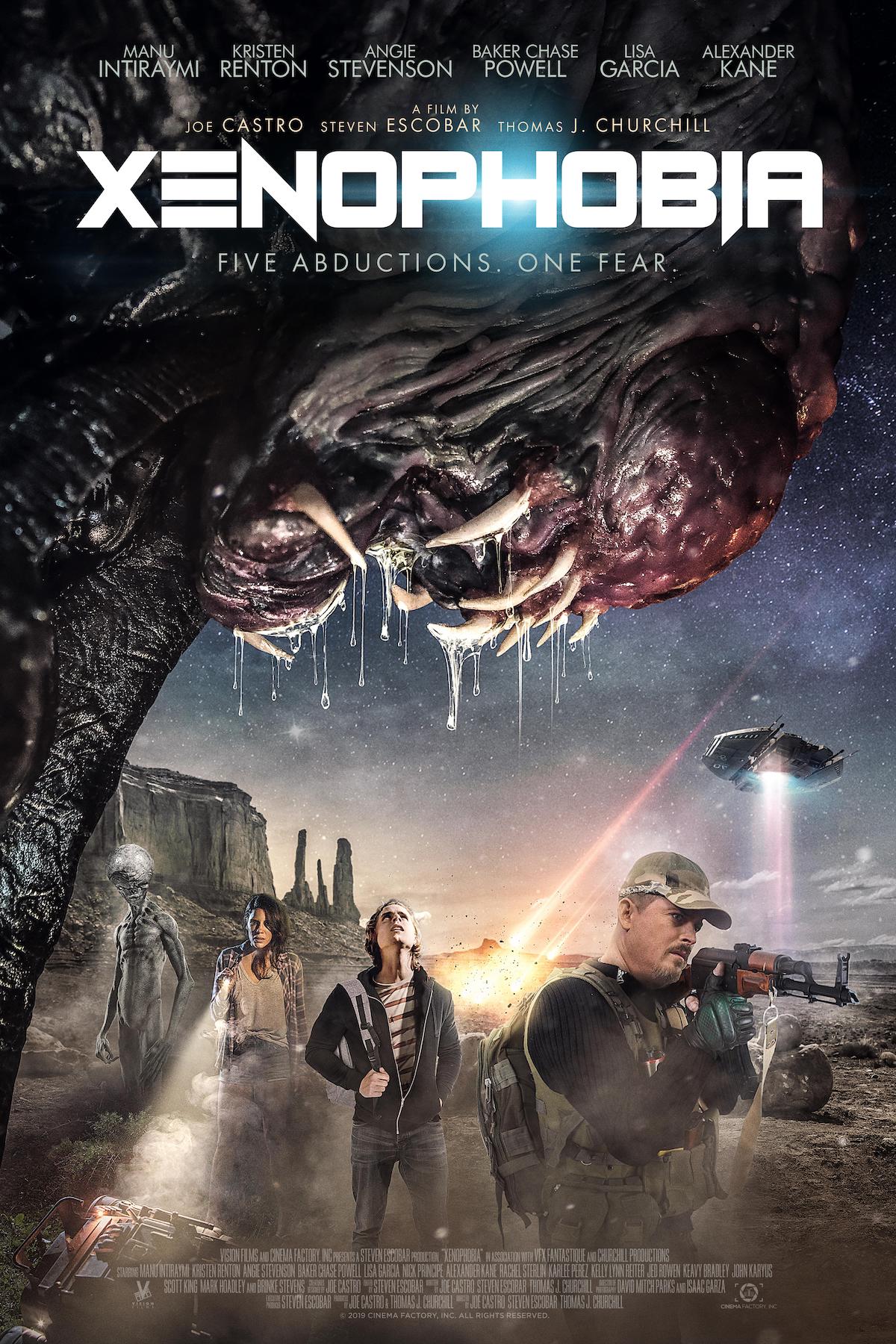 Vision Films Inc. is proud to announce the Red Carpet World Premiere Screening of the exciting new science fiction thriller, Xenophobia. The suspenseful new tale of alien abduction will be unleashed on August 1, 2019, at The Landmark Theater.  Directed, written and produced by Steven J. Escobar, Joe Castro and Thomas J. Churchill, Xenophobia follows victims of alien abduction who discover that their experiences were not isolated incidents and the planet is in jeopardy.

Starring Manu Intiraymi (Star Trek: Voyager, One Tree Hill), Kristen Renton (Days of our Lives, Sons of Anarchy), Angie Stevenson (Sons of Anarchy, Sigma) and Baker Chase Powell (Dating Pains, Irrational Fear), six complete strangers recall the details of their individual experiences with alien forces — sharing the terrifying stories of their abductions and possessions — but the biggest challenge still lies ahead. Can they overcome their fears and trust each other in order to survive?

Xenophobia will be available on VOD platforms including iTunes, Vudu, Playstation, Google Play, Xbox and FandangoNow, as well as cable affiliates everywhere the following week on August 6, 2019.

“Xenophobia is an accumulation of actual alien events and encounters that have been documented over the years,” said co-director Steven Escobar.  “Teaming up with Joe Castro and Thomas J. Churchill who co-wrote and co-directed the film with me, we were able to bring these stories to the screen using state-of-the-art of special effects which we’re really proud of.  Xenophobia is further proof that indie filmmakers can present epic stories and great effects without a studio budget.”

“Xenophobia was a chance of a lifetime for me as an artist and a filmmaker,” said Joe Castro. “It allowed us to create full-scale alien creatures … something that I have always dreamed of as a child.”

“Spending so much of my career in the horror and action space prepared me for Xenophobia, which is my first science fiction film,” said Thomas J. Churchill.  “It was a truly organic transition and I could not have asked for a better team and partners to have done this with than Castro and Escobar.”

“We are thrilled to be representing the sci-fi film Xenophobia and are very much looking forward to its red carpet premiere,” says Vision Films CEO/Managing Director Lise Romanoff. “The question of alien existence is extremely compelling and Xenophobia presents the subject in such a realistic and terrifying way, we can’t help but wonder if we are alone in the universe.”