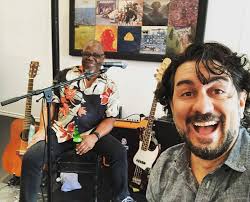 With an exotic sway that slowly becomes more decadent as the music around the beats starts to grow in size, “A Better Day” comes flooding from the stereo and instantly fills the air around us with a warmth that most pop music can’t muster. Mike Donello begins to sing, his voice stained with a hesitance that is both endearing and telling of the mood beyond his lyrical narrative in this swanky track from Mike Donello & the New Essentials, his band’s self-titled debut EP. In this song, much as the case is with its tracklist predecessor “Setting Things in Motion,” harmony and heroic grooves work together to lead us down the rabbit hole and inside the mind of an artist who isn’t afraid to bear his soul to us if it means making a bold statement with his songcraft, the best of which may well be found in the five songs that comprise this wickedly intriguing extended play. Whether it be the supple swing of the drums or the tuneful glow of the vocal linchpin, Mike Donello & the New Essentials is always expressive, even when it would have been more commercially viable for its creators to stick with a streamlined formula than they inevitably did.

“Setting Things in Motion” is the most radio-ready track of this bunch, but it isn’t the only potential single that this record could produce. In the R&B-style “Southside,” Mike Donello takes his rightful place atop strands of a layered guitar melody as steeped in jazz cues as it is light pop pleasantries. It’s not quite as splendid a groove ballad as “Fun and Games” is, but let’s face it, not very many songs could be – right from the jump, this track features a beat that our singer seems to conform his vocal to within seconds of making contact with it around the :30 mark. There’s nothing but confidence in his execution, and even though the New Essentials come awfully close to overtaking their frontman with the tidal wave-like wallop of scooped harmonies at one point in the song, they never succeed at totally drowning out its most potent force to be reckoned with.

My favorite song from Mike Donello & the New Essentials’ eponymous EP is “Roll,” and if you’re wondering why, simply give its first ninety seconds a cursory listen at max volume. There’s so much energy in the band’s play, so much excitement in the way that they broach the climactic points in the track, and yet they never overstate any of the subtleties of their sound in the course of this four minute pop smack down. It’s largely representative of the spirit that you’ll hear in every song here, and more importantly, I think it tells us a lot about who Mike Donello and his backing band are. They’re a young group looking to make a name for themselves in an age of American indie rock that is perhaps more competitive than any other before it, but with material like this upholding their moniker, finding their core audience won’t be difficult at all.