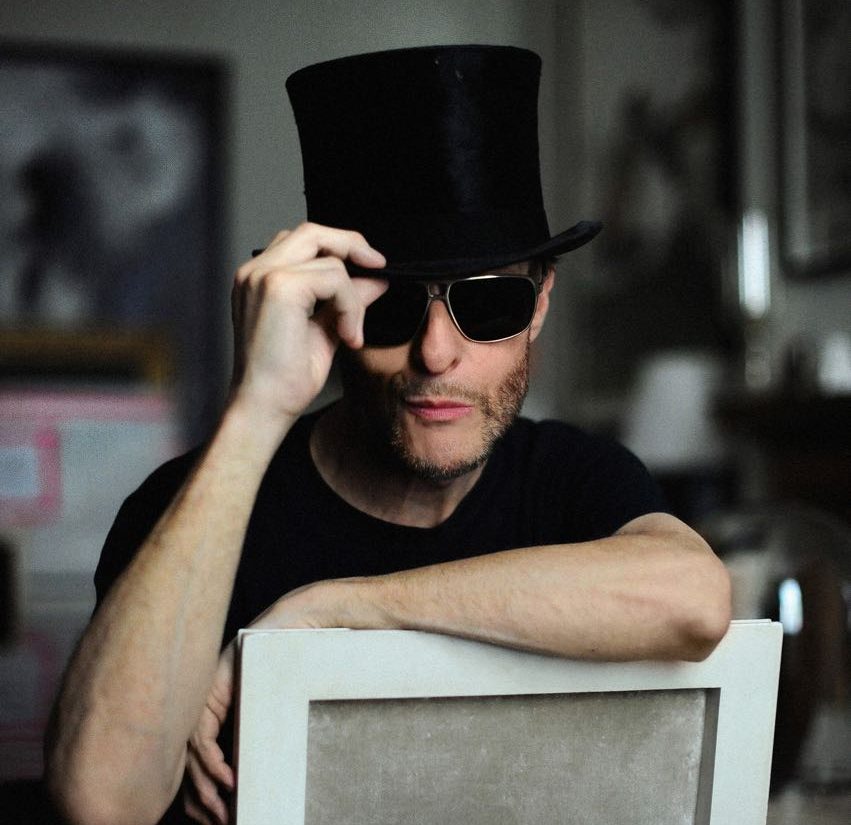 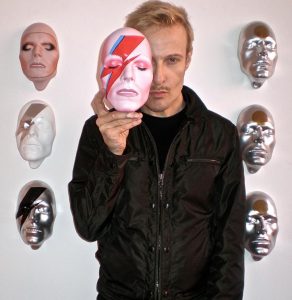 Mark Wardel walks into a room and without knowing whom he is, you just know he’s a rock star…only instead, he’s an artist…an artist to the rock stars. The moment I met him and saw his work I couldn’t help but wonder why he wasn’t world famous yet…..

We need a “Rock Star” artist, and Mark fills the position with ease. To begin with, and one of my favorite things about Mark is: he was in the Adam Ant videos, both “Prince Charming” and “Stand and Deliver”……the moment I heard that I would have bought anything he had to offer….

A relentless fan of David Bowie, Boy George, and anyone Glitz or Glam, Mark’s artistry reflects much of that. His Bowie masks evoke massive emotion, and inspired drama in the best possible way. He still possesses a thank you letter from Bowie sent to him years ago. He’s designed shirts for Boy George, whom he has endless memories with, including sitting by a piano and listening to him sing James Bond themes. He befriended Steve Strange and David Sylvian from the group Japan as well.

We sat for hours as Mark told story after story of his experiences in the 80s until now. Currently Mark works almost always in his studio in London just steps away from the gay bar, ” The White Swan”. His art work, all facets of it, are incredibly creative on many different levels. Mark is a rare anomaly in the world of art. His work represents everything relevant, everything inspirational, and everything audacious. 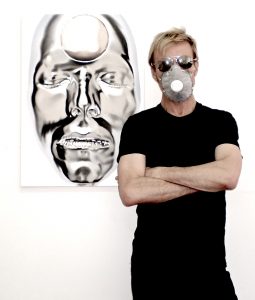 How does your artistry reflect your life’s experience, especially in the 80’s?

I had so many amazing experiences meeting my heroes and going to amazing events and places back then that with the passage of time it all seems slightly unreal like a half remembered dream, so I’m now drawing on my polaroids, photos and memories from those times as subject matter for paintings and also a book I’m writing partly to remind myself that it all really happened and partly to understand where I am now and how I got here.

Your art work seems to be massively influenced by Bowie….please explain yourself. And explain the Bowie masks as well.

Like a lot of my generation and most of my contemporaries as soon as I caught sight of Ziggy Stardust in 1972 I became immediately obsessed with all things Bowie….we adopted his style and his influences ….I learned nothing at school….Bowie was my education on all things stylistic and artistic, his ever curious mind educated us through his interviews in which he’d drop names of people we’d never heard of like Iggy Pop, William Burroughs, The Velvet Underground, Lou Reed, Jean Genet etc. so naturally all this input eventually manifests itself when filtered through your own aesthetic into your work.

I first became a Bowie mask maker by accident in the 90s when a music business friend who worked on official Bowie projects let me take a mould from a 1974 life cast that he’d got from America….I cast my own version which I smoothed and slightly re-sculpted making a few copies for friends such as Boy George and Steve Strange……Then in 2013 the V&A asked me to create an edition of 300 silver Bowie masks in conjunction with the David Bowie Is exhibition…..the edition sold out and so I started creating variations utilizing make-up techniques I had studied from Bowie’s 1970’s makeup artist Pierre LaRoche. Soon after this I had a message that Bowie’s New York office wanted my contact details ….I thought I was about to be told to stop making the masks however, it turned out that Bowie himself wanted to buy 2 of them for inclusion in his official archive.

Do you recall a moment that changed the entire trajectory of your life?

Yes, in 1978 I was new in London and knew no-one apart from my work colleagues at the ad agency where I had started working as a junior illustrator so I had weekends on my own. I would wander round different areas of town just really to get to know the city but in Notting Hill Gate one weekend I got chatted up by the singer in quite a famous punk band and we had a short fling. He introduced me to Roxy Music designer Antony Price and I started hanging out with Antony and becoming friends with people like Steve Strange, Boy George and David Sylvian from the group Japan. I began to paint portraits of these amazing people which lead onto me producing record covers etc. for them and started my career as an independent artist. . So the entire trajectory of my life changed from that one chance meeting in the street…..your life can completely change with every action, decision or place you happen to be at any moment….I find this idea endlessly fascinating.

You’re truly a rockstar artist….give us a little history of yourself, and tell the planet why.

Thanks….I take that as a compliment….although I don’t really see myself in those terms but if other people do then that’s great and if they do see me as being in any way ‘Rock Star-esque’ I guess it’s because I have always been drawn to that particular area and it’s hyper- enhanced style and visuals. Music has always been a very important inspiration to me and obviously in work and socialising I have spent a lot of time around Rock Stars so I guess some of that quality and attitude can rub off. 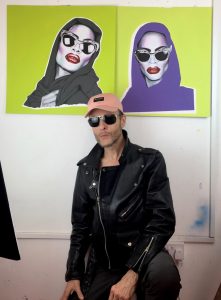 Where would you love to see your work exhibited and why?

Really the ultimate aim of any artist is to have a museum show of their work….unfortunately this tends to happen only after you are dead so until then I’d be happy with gallery shows in London, New York, Los Angeles, Berlin, Paris, everywhere or maybe even Mars…it would be a real thrill to get some artwork sent into space!

What’s the most unique piece of art that you’ve ever created…of course in your own opinion?

I think we really create ourselves in our own image and art and as every person on the planet is in essence unique I guess I’d have to say myself.

Is there an artist that you most look up to?

Oh yeah, so many…of course it changes all the time…when I was very young it was the obvious people like Warhol, Hockney etc. and being a figurative painter I tend to like other figurative painters. One of my current favorites is a black painter from the 60s/70s Barkley Hendricks who has been a big influence on Kehinde Wiley. I also love the work of a French/Algerian artist Djamel Tata.

Do you recall the proudest moment in your career?

There have been two (so far) …one was making the Bowie masks for the V&A resulting in Bowie buying two from me and the other was in 1986 when Andy Warhol told me he loved my hand painted T-shirt and commissioned me to paint one for him…it was validation from both of my main heroes.

When did you realize you had an artistic talent?

There was no definite point…it’s just something I always did and loved right from a very young age. All kids are artists really but most stop making art as they grow up….I just carried on.