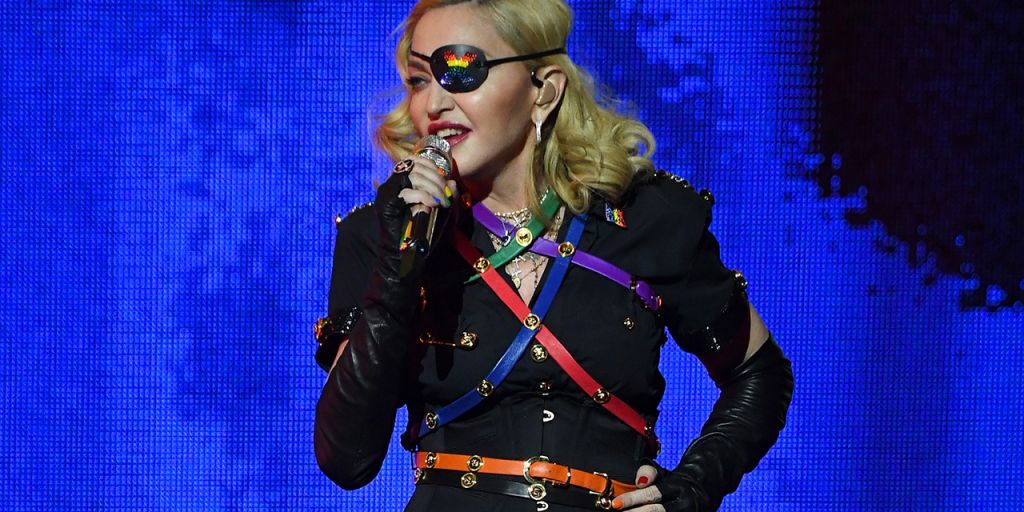 After a weekend of more ‘A list’ star performances than I can count, and less sleep that I get on a weekend DJing in London Vauxhall, it’s gonna take some megastar to tempt this ‘Englishman in New York’ to yet another gig. But in this case the temptress is the undisputed Queen Of Pop (or should we say Goddess of pop!) MADONNA! 10,000 other partially clothed queens must have felt the same as me as I watch Pride Island quickly fill to capacity with a predominantly male ’40 something’ crown of the hottest Gay guys that the Big Apple has to offer.

As the sun sets across the Manhattan skyline the testosterone filled crowd looks more like that of a Beyond club Circuit party than of a pop concert. With their flesh glistening in the reflection of the Pride Rainbow lit Empire State Building, the muscle bound, party hungry crowd are buzzing from wall to wall with the anticipation of the ultimate World Pride performance from their Idol.

‘What are you looking at?” With no introduction needed the infamous sound of the Shep Pettibone two chord string sample echoes through the stadium. There is no mistaking it, she is opening her show with the dance floor soundtrack to every mans gay life, her 1990 number one hit ‘Vogue’. As the stage fills with ‘Madame X’ agents, one by one trying to fool us into thinking they are the real Madonna by all wearing matching ‘Madge’ outfits. The excitement reaches breaking point as Ms Ciccone’s most hardcore fans push and shove against each other in a frenzied attempt to all get one step closer to their messiah.

OMG! There she is! “look around, everywhere you turn is heartache.” OK so now I’m in tears, that young boy screaming at the back of the ‘Blond Ambition’ tour must still be inside of me somewhere and 30 years of a Madonnalicious love affair all comes flooding out as I stand just feet away from my life long pop hero.

“Greta Garbo and Monroe” Undoubtedly the most famous rap in gay pop culture echoes on the lips of every individual fan as they forgive each other instantly for all the previous ‘pushing and shoving’ in a blissful, unified moment of Madonna fueled intoxication! “Vogue, Vogue, Vogue.”

Madonna addresses her loyal subjects, thanking us all for the LGBT+ community embracing her from day one and making her feel like a ‘Somebody’. Every Queen reacts as if she is talking to him personally as we hang off every word like disciples to our holy preacher woman. She performs a full on ‘Armed forces’ style routine to her next song ‘American life’ but then lightens the mood with a joke about every gay man seeing her simulate orgasm! Then onto the promotion in hand, The Madame X album.

The ‘Queen of spin’ has a whole PR speech prepared describing ‘Madame X’ as she performs two tracks from the new album, including the controversial ‘God Control’ which, with shocking gun crime visuals to boot, guarantees to attract a media frenzy re establishing the Material Girl once again as The Queen of pop. Long May She Reign!