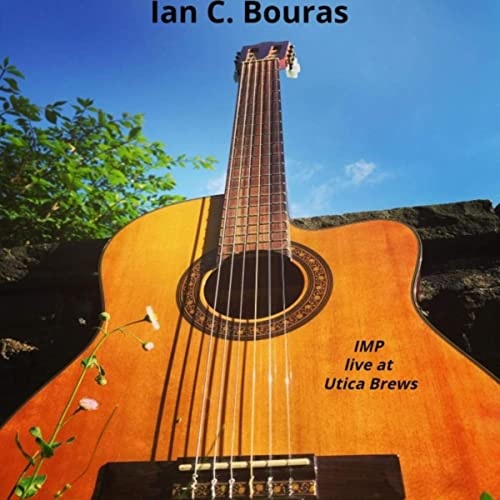 Ian C. Bouras has made some pretty incredible work in the last decade, but in his new release “IMP (Live at Utica Brews),” he takes his studio game to the big stage and unleashes one of his most fine-tuned hurricanes so far. The storminess of this supersized single comes not only from white noise but the subtle electric guitar plucking that generates the foundation of every textured melody here. I’m a fan of the style; this is a prime choice for the experimental buff in all of us, and absolutely among the best records Bouras has ever stuck his name on.

There’s absolutely nothing synthesized about the mixing of “IMP;” contrarily, it’s a straight-up concert recording that leaves both negative and positive noise and feedback in the melting pot of musicality. This was the only way to guarantee that the guitars could remain as physical in the master product as they were in the live performance, and though trying to capture the feeling and essence of the evening was no easy task by any means, I’m happy Bouras found a way to put forth the effort and get all 47 minutes of the show onto the record.

I notice a bit more restrain from Ian C. Bouras in “IMP” than I recognized in some of his previously released material, but I don’t see this as being a complete departure from the attitude he’s had as a composer prior to hitting the stage at Utica Brews for this new recording. He’s very controlled in the way he strikes the guitar here, and even though he doesn’t mind getting aggressive when the mood in the music calls for it, I can tell he’s trying to avoid the temptation to get too crazy and cut-loose almost solely because of the narrative he wants to structure.

There isn’t any percussion in this track, but there’s a bloated component to the flow of the music near the midway point in the song that definitely implies a sense of rhythm (at least enough for me to remember it after a single listening session). Bouras is unbound by a beat here, as is his guitar, but he still seems to search for a way through which he can communicate a heartbeat-like effect, channeling from physical emotions more than he is the cerebral. It’s complicated for certain, but I’ve come to expect nothing less from this artist.

You don’t need to be a longtime fan of Ian C. Bouras to appreciate the evolved look he has to offer in this live effort, but if you have been following him in any capacity over the last ten years-plus, I believe you’ll regard this as being the most well-rounded single song he’s improvised. There’s no rehearsal requirement for an artist who is this in-tune with his own emotions and what he wants to express, and if that was ever in question, it isn’t now. To me, “IMP (Live at Utica Brews)” is a stunner no matter what angle you’re looking at it from.