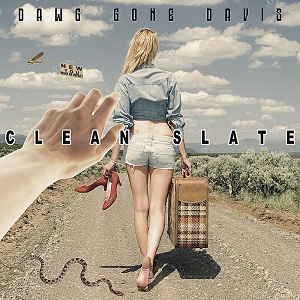 Good producers know how to bring out the best in an artist, with the most elite among them developing a simpatico relationship as defining of the player’s sound as any element of their natural skillset would be. This is precisely the kind of dynamic DawgGoneDavis has with her producer Chago G. Williams, and their collaborations together have become nothing short of legendary in the Kansas City underground she’s come up in. The latest of her singles to raise an eyebrow among critics, titled “Clean Slate,” is one of the more masterful examples of this duo’s chemistry captured inside of the studio so far, and if you’ve been keeping up with the evolution of DGD, you know this isn’t exactly a small statement for any critic to make.

The lyrics and execution thereof serve the same purpose in this single, and that is to push us to the brink with an overwhelming swell (literal and poetic the same). Born more of the instrumental discord than any actual synthetics, the style of this mix lends plenty of room to our singer to unleash charismatic – though completely and utterly enigmatic – verses without having to be literal with any of her words. The metaphors are deliberately made confusing by the mess of melodic noise they’re pushed out against, and it isn’t until we get into the climax of the song that we begin to understand just how significant all of the chaos is to the narrative. DGD is telling us her story with texture and tonality much in the style of an experimentalist as opposed to just rapping to a slick beat, asserting herself as more indie than maybe even I had pegged her as prior to now.

All of the melodic foundations aside, the beat here is super-smooth and controlled by the vocal at all times, reminiscent of an old fashioned approach to simplistic hip-hop not utilized nearly as much as it should be in 2021. There’s nothing other than the blueprinting to suggest DGD wanting to make a structural throwback in “Clean Slate,” and when you think about how progressive the cosmetics of the track are, it’s a rather powerful showing of versatility on her part. She’s never been one for submitting singular concepts in her work, and with Williams by her side, it looks like this trend in her career won’t be changing anytime soon.

If you thought you’d heard everything DawgGoneDavis was capable of by now, you’d better think again and brace yourself for the action created in “Clean Slate” this February. DGD is never going to be a rapper who wants to fit in with the conventional end of the game; she’s demonstrated a carefree attitude that requires sticking to the strange if she’s to sustain her credibility in the long run, and I love what she’s done so far. “Clean Slate” is another fine addition to her catalogue and, based on her track record, probably not the last exciting release she’s going to issue before the year has come to an end.

The music of Dawg Gone Davis has been heard all over the world in partnership with the radio plugging services offered by Musik and Film Radio Promotions Division.  Learn more https://musikandfilm.com