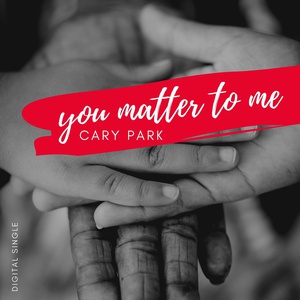 A true guitar troubadour, Cary Park has supported dozens of legendary artists both in the studio and on tour. He’s also contributed to numerous television projects over the years. Now, his sophomore project Cary Park 2 (StarPointe Records) features the earnest hit “You Matter To Me”. A tender song, “You Matter To Me” has many poignant guitar moments.

Park, born and raised in Southern California, possess the fine mix of grit and grace. His voice has a smoke to it, chiseled off from years of working with rock groups, and yet, his demeanor is soft like the Los Angeles sunshine. He’s warm and endearing. As a listener I was swept away by the moments in-between the lyrics – that faint gathering of breath, the slight moment he takes to emotionally deliver the words. It wasn’t hard to picture Park recording the song, imagining him behind the studio mic and his eyes closed. His emotional presence in the song is palpable.

The line “and at the end of every day, I know just one thing, you’re the only thing that matters to me” seems so ripe with emotion that it’s almost hard to not cry. Park’s voice doesn’t crack, but the guitar neck nearly weeps, the raspy layer in his character-filled voice. He sounds like he’s unburdening years of keeping something in tight, at the same time the relief of sharing it is so joyful. The guitar just sort of caresses itself around his voice, as if it’s the trusty sidekick.

I also loved the line “the best part of the journey of love, like finger to glove”. This presented such a clear picture to me. Cohesive. Stamped. The more I listened to the song, the more I kept coming back to that line. It also really made me think of hand-in-and and the idea that we place the wedding ring on left ring finger.

The guitar work, as expected, is superb. The sound is very bright, resembling a melodic tone. While listening, I had visions of Eric Clapton, America and Tom Petty rolling around in my head. I think they are all in the same realm, but Park situates his music really in a sound based more in the adult contemporary station. “You Matter To Me” is a slow dance. It’s an intimate song that begs to be listened to, really listened to, and not passively. The emotion in Park’s voice carries the story to his guitar.

Percussion wise, it was really subtle. I wasn’t surprised that the final mix would have mostly guitar and vocals, with faint drum work. It’s there, as is the rhythm, but the real magic is happening between Park’s guitar playing and his heart-on-sleeve singing. He brings majesty, intricate southwestern and breezy guitar riffs to “You Matter To Me”.

This song is a meaningful love letter. It’s a great listen for fans of musicians mentioned above – Tom Petty, Eric Clapton, America, Ambrosia. If your Spotify list also includes Toto, Little River Band, Jim Messina and Neil Young, point your music map compass to Cary Park. “You Matter To Me” is written by Park and Pat Melfi.