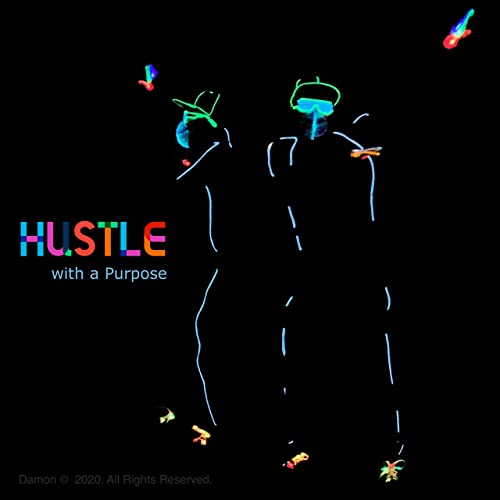 “Hustle With a Purpose” by Damon joined by the Crushboys

Sensuously aggressive yet not nearly as adrenaline-centric as some of the other content I’ve been hearing this year has been, the groove in Damon’s debut single “Hustle With a Purpose” is the primary draw in the track but hardly its only hot feature. In “Hustle With a Purpose,” Damon is joined by the Crushboys, who back him up just enough to give him the slick depth needed to make a big impression with audiences in 2020. His vocal is the main star of this show, and even when he’s working against a beat as sterling as the one we’re met with at the onset of the track, he never sounds even slightly intimidated by his surroundings.

Damon has an able supporting cast in the Crushboys, but this song is undisputedly produced around his conveyance of the lyrics, which serves as both a poetic and sonic linchpin in the composition from start to finish. No one is having to compete for the spotlight because the focus is always on the harmonies that are unfolding, as opposed to one specific facet within his vocal delivery. Damon’s words are reflected in the melodies and vice versa, yielding a full-bodied experience standing in strong contrast with a lot of the thin pop fodder coming out of the underground at the moment.

The bassline here is mixed with just a taste of subtle surrealism that complements the vocal style our leading man is using in “Hustle With a Purpose” wonderfully. It takes a lot of time and energy to work out the kinks in a danceable number that features as lush a vocal as this one does, but it’s obvious even to the most novice of critics that Damon and the Crushboys were leaving nothing to chance in this release. They had a general premise, a formula for execution and the right kind of talent to put it together in time for the summer season.

I would have preferred just a little more of a kick to the percussion towards the conclusion of “Hustle With a Purpose,” but I can also understand why Damon would decide to go a different route instead. By keeping the groove here as steeped in bassline intensity as it is drum-laden physicality, there’s a lot more room for the vocal to influence the sway of the beat (and certainly more than there would have been in a percussion-heavy mix). This single is definitely on the complex side, but that might be why it feels so memorable.

There are a lot of interesting players emerging in hip-hop and R&B this year, but if there’s one indie hybrid that fans of the alternative sound are going to be interested in hearing, it’s Damon. His debut single is a slice of melodic heaven and hopefully a solid preview of what his future output is going to sound like, and regardless of how long it takes him to get back into the studio, I think this is a great means of setting the stage for any upcoming projects he wants to engage in.

The music of DAMON (FT. THE CRUSHBOYS) has been heard all over the world in partnership with the radio plugging services offered by Musik and Film Radio Promotions Division.  Learn more https://musikandfilm.com