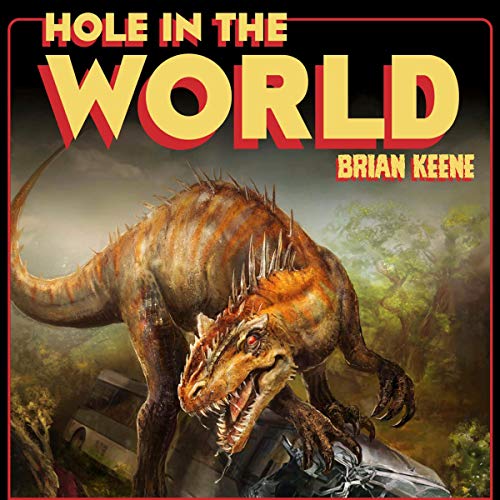 “Hole In The World” – A weird fantasy prequel to Brian Keene’s popular “The Lost Level Series” has just been released in audiobook format. Narrated by Doug Greene and available worldwide, download your copy today!

An hour ago, they were 19 strangers on an airport shuttle, braving travel delays and a freak blizzard. Then they fell through a hole in the world. Now, they are 19 strangers trapped in a dangerous dimension filled with prehistoric monsters, futuristic technology, and otherworldly mysteries. They’ll have to learn to work together if they want to survive and return home…but will any of them be left alive by then?

BRIAN KEENE is the author of over forty books, mostly in the horror, crime, and dark fantasy genres. His 2003 novel, The Rising, is often credited (along with Robert Kirkman’s The Walking Dead comic and Danny Boyle’s 28 Days Later film) with inspiring pop culture’s current interest in zombies. Keene’s novels have been translated into German, Spanish, Polish, Italian, French, Taiwanese, and many more. In addition to his own original work, Keene has written for media properties such as Doctor Who, The X-Files, Hellboy, Masters of the Universe, and Superman.

Several of Keene’s novels have been developed for film, including Ghoul, The Ties That Bind, and Fast Zombies Suck. Several more are in-development or under option.

Keene’s work has been praised in such diverse places as The New York Times, The History Channel, The Howard Stern Show, CNN.com, Publisher’s Weekly, Media Bistro, Fangoria Magazine, and Rue Morgue Magazine. He has won numerous awards and honors, including a World Horror Grand Master award, two Bram Stoker awards, and a recognition from Whiteman A.F.B. (home of the B-2 Stealth Bomber) for his outreach to U.S. troops serving both overseas and abroad. A prolific public speaker, Keene has delivered talks at conventions, college campuses, theaters, and inside Central Intelligence Agency headquarters in Langley, VA.

Download your copy of “Hole In The World” written by author Brian Keene and narrated by Doug Greene in audiobook format on Audible here: