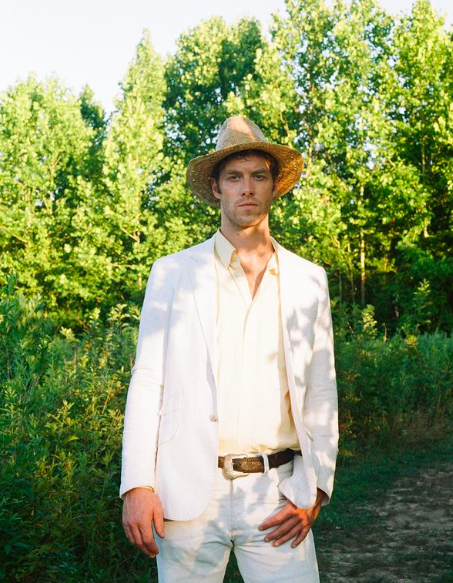 A diverse mix of American roots music, out-of-the-box pop flourishes, gospel harmonies, and barroom rock & roll, Charlie Treat’s The Comet spotlights a songwriter whose left-of-center music redraws the lines between genre and generations. It’s a collection of songs whose paradoxical twists and turns are as unique as the man who wrote them. Raised on a farm in New England, Charlie grew up listening to the music that suited his working-class surroundings — Delta blues, country classics, work songs, and Bob Dylan records — before traveling the country as a busker, accompanied by his acoustic guitar and 1988 Oldsmobile Cutlass. After a Kerouac-worthy series of milestones and mishaps led him back to the Northeast, he established himself as one of the region’s folk singing heavyweights before heading south to Nashville, where he found a new home in a city that had become synonymous with Americana music. Charlie easily fit into that musical community, even as his own songs ventured into the genre’s outermost orbits.

What were your musical influences that inspired your new music?

The community around me, as in a lot of friends playing bluegrass and old time music. I’ve listened to Woody Guthrie and Leadbelly and old bluegrass songs since I was a kid. But it was the friends around me that rekindled that flame and inspired me to make an album that way.

Are there any specific terms you have with yourself to make sure to put out the best version of your music possible?

I’ve found it’s either going to take a really long time or you do it as quickly as possible. I don’t have any specific terms, I just know when I hear it if I don’t like it and it needs to be re-cut or if I like it and it’s something I want to hear in the car over and over.

How do you magnify what needs to be changed when creating new music?

I try new grooves and tempos until it’s right. Just because something is beautiful doesn’t mean it’s right. A song needs to live in the perfect environment/context. There’s a hundred different beautiful ways to present a song but there’s often only one or two correct environments  – where that song was born to be. You put the band through the ringer until it clicks.

Who helps aid you when you are being too hard on yourself?

My band, my friends, my girlfriend, God, nature, the bar.

Is there anything in terms of your music that may seem too overwhelming? How have you navigated in being able to share the load of your work with others in the process?

Releasing a record is always stressful, especially when you do it independently. There’s distribution, uploading 6 weeks in advance, ISRC codes, getting the right pictures, making music videos by myself, etc., all while trying to work and gig in the midst of it. I give props to anyone who even attempts it. I try not to share the load too much because that costs more money. Even independent artists spend upwards to $20-30k for a record before they even release. You can spend that much on the back end on publicity and music videos if you’re not careful. It’s not for the faint of heart or soft worker. You have to see yourself as a business – “how do I make this business grow?” – and then be able to put on your writer’s cap once a day and be an artist too.

Any burst of creativity that you’re experiencing right now?

I’m having a lot of fun taking old bluegrass standards and American Songbook songs and turning them into pop songs and soul songs. None of it’s released. You’d have to come see me live to hear it.

How do you keep the fun in your work?

Reading, exploring, finding placards, incorporating history. Going on a road trip, getting out of Nashville, even just a hike or a drive to some small town I’ve never been before is food for song. You can “invent” ideas, and sometimes they come from a deep well long before you were ever here, sometimes, but it’s more immediate and visceral to keep your life interesting and adventurous and allow your songs to read like autobiographies.