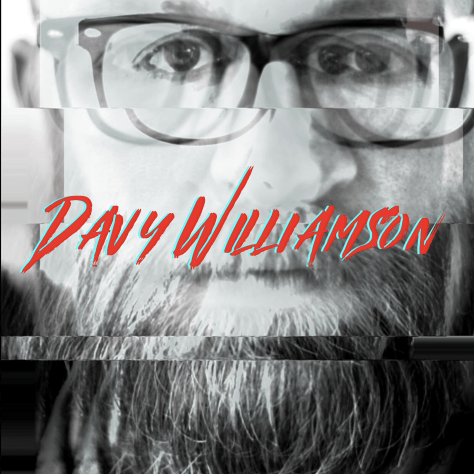 “Down By The Fire” (EP) by Davy Williamson

Over the course of 8 tracks, Davy Williamson brings his moody gothic sensibilities to the forefront with his album Down By The Fire. Starting out with the winding sonics of Thin Disguise that sees Williamson at his most angsty as he sings that he’s struggling with the pain inside as he hates the lies he’s being fed and the way he creates such an organic compelling rhyme scheme from these phrases is pretty awesome, I’ll admit. At one point he says he cannot hide his voice any longer and he’s going to show us all one more time. He proclaims loudly to an unseen force that he won’t be like them and considering that he was in a few bands prior to establishing his solo career, it might not be a stretch to assume he’s talking maybe about some former bandmates?

There’s a fantastic electric guitar riff in the middle and I’m actually very curious to see if Williamson did all the instrumentals himself. His sound is very cinematic and actually reminded me of the work of Junkie XL, the composer of Mad Max: Fury Road with the smooth and aggressively potent electric guitar hums that travel across each song. The track “Ciche” is a good ole fashion headbanger as he sings “You claim, I’ve changed” and once again, it’s not hard to maybe process where he’s coming from as he wrote all these.

The songs will still no doubt his a universal core with others who’ve become disaffected and jaded and given the last year or so, there’s gonna be plenty who will see themselves in this music and I hope that touches Williamson that he is able to take what is obviously his pain and turn it into art that others can now feel a catharsis through. It’s a lot of songs filled with a deep remorse and confusion and the way he slows things down with the hypnotic interlude following the more romantically charged anger ballad “Fault Line” is just expertly handled. I think in some ways, he still has a lot to grow in as far as a vocalist and lyricist, not to say he’s not good or even bad now, he just feels a little too traditional.

These songs are clearly personal and they’re better for it, but I’d like to see him switch things up and maybe make something that harkens back to some pre-2000s sounds because a few times it does sound a little too Blink-182, but it’s still really well done and plenty will enjoy it, I have no doubts about that it will receive as much acclaim as I’m giving it now. The Ep is currently available to stream on most major platforms and if you’re interested, maybe check out some of his former band work with Third Class Passenger and Ma-shot-pa and you’ll gain a deeper appreciation of what he’s accomplished with his own growth. Williamson fire is only burning brighter and brighter and you should take notice before you get burned.