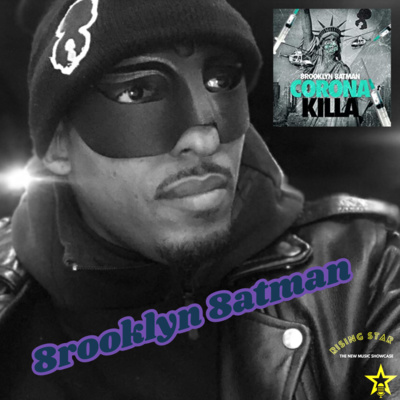 Getting a rap career off the ground isn’t as easy as the media might have you believe in 2020. You’ve got to have legit talent to even get your foot in the door, let alone acquire an audience in a timely manner, and that’s long before getting a shot at the primetime. In his new single “Chitty Bang,” featuring Dre DaMost, 8rooklyn 8atman puts everything he’s got into exhibiting his best skills for audiences to get acquainted with, and while his isn’t the only interesting hip-hop track out this June, it’s become one of my personal favorites recently.

I didn’t find anything derivative in this beat; we’re not listening to a groove that’s been cycled from Quality Control, nor does it ever feel like we’re listening to something that’s been reworked from another corner of the pop music universe. There’s an exceptionality to the sterling nature of the rhythm in the percussion here that I haven’t been able to get away from since first listening to “Chitty Bang,” and as much as I like 8rooklyn 8atman’s talents on their own, they’re made all the more accessible to us through the prominent instrumental background he’s working with in this track.

There’s definitely a sharper than usual-edge to the bass in this song, but 8rooklyn 8atman is careful to employ it only when absolutely necessary, after the sixty second mark in the track, there’s a lot more intensity to the lyrical delivery than there was early on in the first few verses of “Chitty Bang,” but this acrylic bassline makes it possible for the tempo transition to come off without a hitch. Some time and effort went into making everything about this single flow perfectly, and I think that’s probably pretty obvious to anyone who picks it up at the moment.

The cerebral lyricism in “Chitty Bang” alludes to their being a lot more of a surreal influence in this artist’s sound than would be cosmetically noticeable in this capacity. 8rooklyn 8atman is coming out of the woodwork at a time when postmodernity is ruling supreme in the hip-hop community, but I don’t think he’s merely pursuing a trend in this song. He’s got too unique an approach to his content for that to be the case; even if he were interested in making a quick buck, I don’t believe he’d have put this much heart into the material at all.

Although he’s got competition coming at him from virtually every part of the earth right now, I think it goes without saying that 8rooklyn 8atman is one of the season’s best new finds for indie fans. “Chitty Bang” is an indie hip-hop anthem that doesn’t demand a lot out of us for the wealth of chills and intrigue it can provide during any given listening session, and if it’s representative of who 8rooklyn 8atman is going to be in the years ahead, it’s going to mark the start of a lot of good things for this artist’s moniker moving into the future.