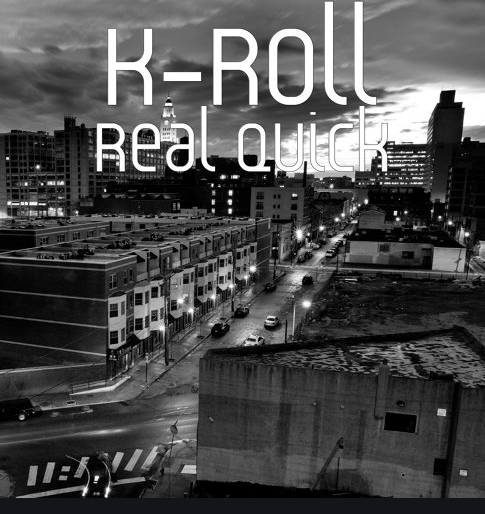 The cadence and flow in “Real Quick” from new-to-the-scene K-Roll is not the flabbergasted, whirlwind you might think based on its title. It’s pretty swift, but the term comes from the story line. South Carolina’s K-Roll drives a hard bargain for getting to the studio real quick and laying down beats in this fun song. Catapulting the listener into this dome of dope attitude and repeated, ear candy chorus is just one of the many attributes in K-Roll’s repertoire.

Light-hearted and never out of style, songs like “Real Quick” give an insider’s look at the mind of a young artist, who might not have grown up on hip hop, but has embraced this style for many years. K-Roll (Kevin Rollinson) condenses the exhilaration of writing and recording a new song, packing it into a short track that well, justifies, the “real quick” emphasis even more. There is no weak link, or down time in “Real Quick” as the positivity is soothing and highly embraced. When the female vocalist starts to sing and rap, the song changes into another direction, but it’s easy to stay with the changeups. She’s a bit inaudible at times, but only because I was still enamored with the chorus that just wouldn’t leave my head.

K-Roll spits out tell the djs put it into the mix, and my head and shoulders started to bob. I was really into it! Mainstream hip hop fans will really like “Real Quick”. It possesses a catchy tune and the minimalistic production will help you appreciate the bars even more. He throws in a few guitar riffs here and there, giving the music bed a more R&B, pop or AC vibe. His voice does go against the grain a little, and his unique artistic stamp can at times be palpable. Honestly, this song could easily make its way onto a movie soundtrack or Top 40. I think we’ve all had a eureka moment, and I felt like K-Roll’s moment in this song was his way of encouraging his fans and listeners to follow their dreams. Maybe I’m completely wrong and it’s a metaphor for sex, and K-Roll is ready for a quickie. But it’s a clean-cut track with little bells and whistles. It’s raw talent and keen music. It’s nice to savor this song for a while, but not too long, because it does move quickly. I think I’m wrong. I’m assuming I’m wrong. K-Roll’s press materials mention that he grew up singing gospel.

Overall, “Real Quick” is dynamite. It’s a great track for an exciting new artist. I wish I could find more songs he’s released, or even a Spotify Channel. No luck. We will just have to wait and see what’s next for K-Roll’s career and what song he drops next. His biography also notes that he’s been an actor, so who knows, maybe we will see him next on the big screen. Music fans that enjoy Snoop Dogg, Warren G, Nelly, and 2Pac will want to take a quick listen to “Real Quick”.

The music of K-ROLL has been heard all over the world in partnership with the radio plugging services offered by Musik and Film Radio Promotions Division.  Learn more https://musikandfilm.com