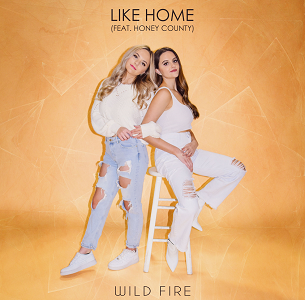 In their new single “Like Home” sisters Kelli and Kayla Iutzwig, the duo that is Wild Fire, synergize melodies bigger and more golden than the prairie fields. They possess sibling harmonies that blend so well, it’s hard to even notice there are two individuals behind that microphone. Wild Fire cultivates a warmth, a bold and dashing sound that spills into both the pop and country genres. Touching the heart and the soul, “Like Home” shines bright in the glow of the extended harmonies. Still, the storyline, like any great country tune even if it’s taking a small step into the pop pond, gets you every time. “Like Home” is filled with cozy guitar undercurrents and a flow that makes the dreamy days seem near and dear. “Like Home” has the Iutzwig sisters co-writing with the female-country duo Honey County.

I hear your voice and everything’s okay, Wild Fire sings. The song is about being quite a distance away from a longtime boyfriend. The protagonist is transported back to high school, watching the football games (the lyrics mention the turf) and taken back in time while clutching the boyfriend’s shirt. The smell of the cologne still intact, Wild Fire lets the oh-oh-oh linger like it was made for a large audience to sing back at them at a future concert. The idea of high school and that pivotal moment in one’s life and time transitioning to adulthood makes great sense: the Iutzwig sisters are still in their teens. Furthermore, they grew up in Houston, Texas, and one can just picture the backdrop of the Friday Night Lights. It’s part of them, and it’s part of the fabric of the community.

I loved the storyline of the song and the innocence it conveys. Wild Fire communicate to their audience on a level that feels sincere and in an open-diary revelation. I think we can all relate to a moment that we were transported back to a memory – be it the smell of a certain cologne or even déjà vu going back to your hometown. The other layer to this song is the romanticism of being apart from a loved one. Wild Fire deploys their superb harmonies and it’s hard to not bask in their honest love. At times the music bed has guitar plucking, but for the most part, as a listener, I was drawn to the vocals. Producer Austin Moorehead, the guitarist for Carly Pearce, definitely leaves his stamp on “Like Home” and his influence is felt. Still, I can’t help but be transfixed by Wild Fire’s intuitive singing. Their voices do sound young. I was struck, though, by the complexities of the vocal arrangements and the natural ease coming from these voices.

Caught in the lushness and the grand soundscape that “Like Home” projects, it’s a no brainer to call Wild Fire the next big thing. But I’m sure if you’ve been following the indie country scene, you already knew that. You can know something and it doesn’t feel real until you feel it. I felt it in “Like Home”. This one’s a genuine keeper.