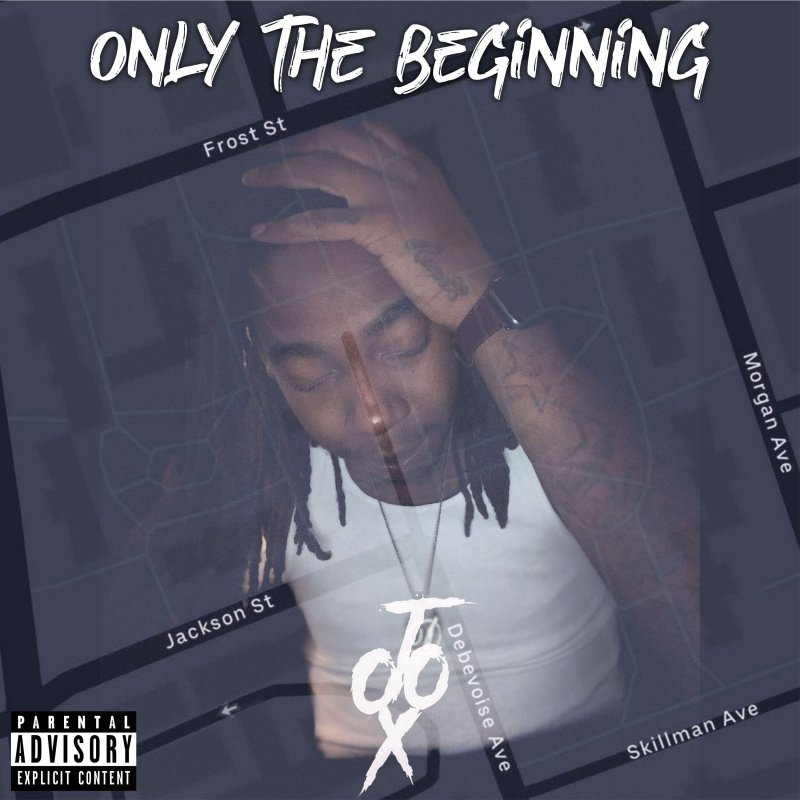 If there’s a signature vibe we’re introduced to in the first couple of beats included on Toox’s stellar new LP, Only the Beginning, it’s undisputedly a sense of calm in the center of the storm, as is presented in the track “We’re Alright.” Although it’s a mere three-minute glimpse into the slickly swing-based and surprisingly melodic hip-hop charisma Toox brings to the table in this kind of setting, I found it to be more than enough to keep the listener engaged with both the poetic and implied musical narratives at hand. Only the Beginning has an optimism buried beneath the surface that isn’t that hard to dig up – particularly given how seamlessly its composer is willing to lend us a shovel.

“Brooklyn (K)night)” sees Toox getting into the guts of the groove-based flow he’ll utilize throughout the better part of this album, but I wouldn’t say it singularly encapsulates the compositional style of the tracklist overall. The hesitant beat of “Rocket” clears a lot of space at the forefront of the mix for my man to illustrate a vocal dexterity typically left out of the mainstream hip-hop community in favor of abusing synthetic studio elements, which is quite clearly something he never even considered when making Only the Beginning.

“Ain’t Fuckin’ with Me” is probably the hardest-hitting throwback in this collection of songs, but while this performance would probably have allowed for a lax attitude behind the mic from a more inexperienced artist, Toox is doing the polar opposite with the show he puts on here. Other than the Scarface-style “Crack Muzik” and experimental “Don’t Talk to Me,” “Ain’t Fuckin’ with Me” puts the most performance on his poetic talents of any track on this record, and proves that he doesn’t have any issue throwing down some serious verses even against the tensest of backdrops.

I liked the casual rhythm of “Originals (Crack Rose)” right out of the box, but after a few dedicated listens I think it’s probably among the more well-arranged pieces Toox has recorded in his career thus far. “Brown Bag” and “For the Love” are pointedly surreal in the most modern fashion imaginable, but they circumvent a demand for minimalism by simply leaving anything unnecessary out of the mix in the first place. This is a man who knows his way around the board, it would appear he truly comes alive when he gets into a studio setting more than he does anywhere else.

Only the Beginning finishes us off with an ambitious slab of controlled chaos ala “Feel’n It” and a startlingly enrapturing outro in “Ok Ok” that could probably stand up as a single as well as any other song here could. I’ve had the great pleasure of keeping up with the music Toox has been spinning out of the American underground in the last couple of years, and I think that it is impossible for a credible critic to look at his latest release without immediately recognizing both the growth and the potential he continues to exploit with marvelous results. He’s turning a corner with the experimental faceting of this LP, and I can’t wait to see what comes his way next.