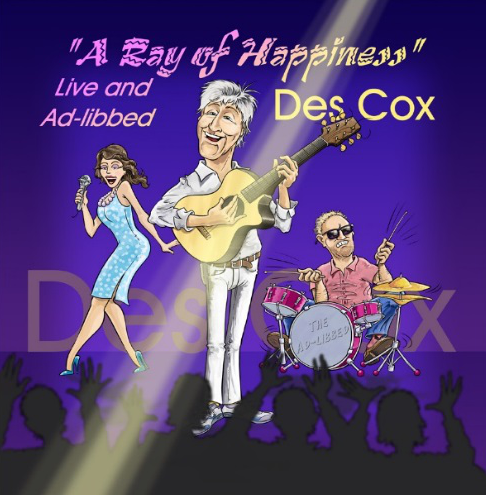 A strutting beat, some jagged guitars and a jarring melodic attack that is as salty as it is sugary in a couple of key spots. What do you get when you throw all of these ingredients into a single sonic melting pot? In a nutshell, you wind up with something along the lines of Des Cox’s “My Internet Lover,” which is out everywhere discerning indie fans can find quality music this season. Written and performed by the one and only Des Cox, whose live shows have gained him quite the cult following in the UK over the years, “My Internet Lover” is, in more ways than one, a terrific example of the increasing interest in surrealism and postmodern features in pop music around the world right now. Abstract in truly unexpected ways, the song defies the basic fundamentals of what a hook-oriented piece of music is supposed to flow and feel like, instead skewing the downright strange with a childlike simplicity that is as intriguing as it is complex. There’s a lot of intellectual factors coming together to make this song as interesting as it is, but the bottom line is quite simple – avant-garde fans really can’t go wrong here.

There’s a very thin bottom-end in this track that some would criticize as being too subtle to substantially shape the groove as much as the drums do, but I personally beg to differ. I think the minimalist bass element is necessary to emphasize the velvetiness of the vocal harmony, which, for intents and purposes, is the most vibrant attribute “My Internet Lover” has going for it. The percussion is a little loud in the master mix comparative to what some of Cox’s more timid peers might have gone with in the studio, but its physicality is a cornerstone of the song’s overall catchiness. I was taken aback when I learned that Des Cox adlibbed this tune in its original incarnation; it’s impressively fluid, streamlined and arranged as though it were carefully rehearsed beforehand. Top notch showmanship almost doesn’t do it justice; truth be told, this guy is in a league of his own among those in the British underground right now.

“My Internet Lover” is hardly the only avant-garde number I would recommend to audiences in the UK and abroad this season, but just the same, it’s far and away one of the more melodic I’ve heard in a long time. It would be really stirring to hear a complete live album of Des Cox’s highly-buzzed stage performance, and I think this song would belong as one of the staples of his setlist. He’s the type of artist who is at his most comfortable and at home when he’s in front of the crowd and under the spotlight, which isn’t as easy as it might sound on paper. Undertaking the pressures of adlibbing, improvising and creating concepts on the fly can be devastatingly difficult for artists of a lesser pedigree, but judging from “My Internet Lover,” the entire practice comes as second nature to Des Cox.

The music of DES COX has been heard all over the world in partnership with the radio plugging services offered by Musik and Film Radio Promotions Division.  Learn more https://musikandfilm.com