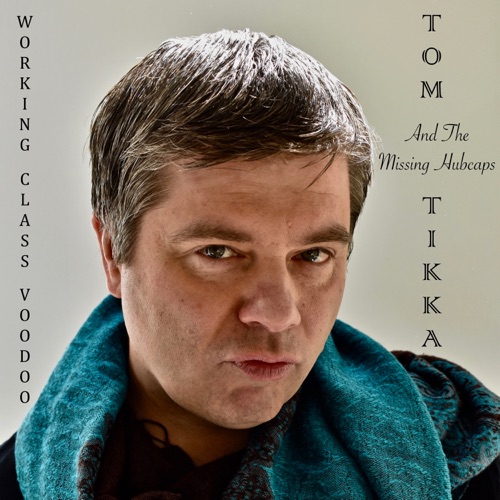 Working Class Voodoo is my first experience with Tom Tikka’s music but it won’t be the last. The three song EP release isn’t perfect, but makes it clear to these ears that the songwriting defining a typical Tikka release is well-rounded and top-flight. There’s no sense of him taking short cuts in an effort to pander to listeners. There’s no question Tikka and the Missing Hubcaps pursue a commercial sound on Working Class Voodoo but it never comes at the expense of songwriting integrity. It is obvious that the first sensibilities Tikka looks to satisfy is his own and, with that accomplished, hopes listeners will follow him. The three songs he slates for inclusion on Working Class Voodoo are the sort of tracks that encourage music devotees to follow along.

The assertive guitar playing popping up throughout “Working Class Voodoo” flares to life at all the right times and plays off quite well against the drumming. That latter instrument is a definite tone setter in each of Working Class Voodoo’s three tracks, but makes an overt impact on the first and second songs. The drumming on the EP’s final song “What Is Love?” exerts a similar effect on the track, but the gait and sound of that third cut is different than its two predecessors. “Working Class Voodoo” has the EP’s best melodies, the arrangement’s contribution in that area really sticks with me, but Tikka gives the vocal melody considerable life and the song’s harmony singing underline its strengths.

There’s similarities between the first track and “Daytime Suffering”, but the lyrics go in a different direction from the title number. There’s still a considerable focus on guitar work without ever dragging the track into “guitar rock” territory and, despite not boasting melodies as impressive as we heard during the opening, there’s plenty here to lodge the track in your subconscious. Tikka makes relatively extensive use, once again, of harmony vocals, but they don’t contribute as much here as they did for the EP’s title song.

“What Is Love?” has a more measured pace than the first two cuts. It sounds like Tikka and the Missing Hubcaps are potentially settling in for an extended performance, and the song lends itself to such possibilities, but Tikka never bites off more than he wants to chew. There’s a lot of introspection laced through this track, particularly lyrically, but it wouldn’t reach the emotional heights it aims for if not for the patient and judicious guitar and powerhouse drumming. The percussion does an exceptional job elevating its drama.

Tikka has been at this a long time so I rue not discovering him sooner, but I can scarcely imagine a better introduction than these three songs. It gives me a slender frame of reference for listening to come and the brief collection stands on its own as a substantial piece of musical art. Tom Tikka and the Missing Hubcaps only offer listeners three songs with their release Working Class Voodoo, but each song is satisfying and holds up under multiple hearings.