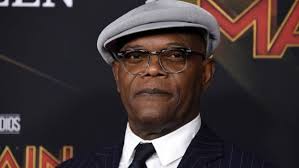 Samuel L. Jackson is unconcerned by an eyepatch error in some Spider-Man: Far From Home posters.

Earlier this week, the Marvel movies regular took to Instagram to share a side-by-side comparison of two separate posters featuring his character Nick Fury, in which his signature eyepatch appears on different eyes.

Jackson captioned the images: “Uhhhhhhh, What In The Actual F**K IS GOING ON HERE???!!!,” suggesting “#headsgonroll.”

However, when speaking to reporters from USA Today at the movie’s Los Angeles premiere on Wednesday, he insisted the social media post was made in jest.

Reflecting that fans probably misinterpreted the post because of his use of expletives, he added: “I use that word (f**k) a lot. Always.”

All of the Spider-Man: Far From Home cast turned up for the debut screening, including Tom Holland, who plays the lead role of Peter Parker / Spider-Man, Jake Gyllenhaal as Quentin Beck/ Mysterio, and Zendaya in the part of Michelle “MJ” Jones. While all of the stars got dressed up for the night, it was Zendaya who captured the attention of photographers, with the 22-year-old rocking a red and black sequin backless gown from Armani Prive. She opted to accessorise with black stilettos from Christian Louboutin and had her freshly dyed dark red locks styled straight.

“If she was Spider-Man this would be her suit….. wearing Armani Prive @armani and @louboutinworld,” Zendaya’s stylist Law Roach wrote alongside a snap of the actress posing on the red carpet.