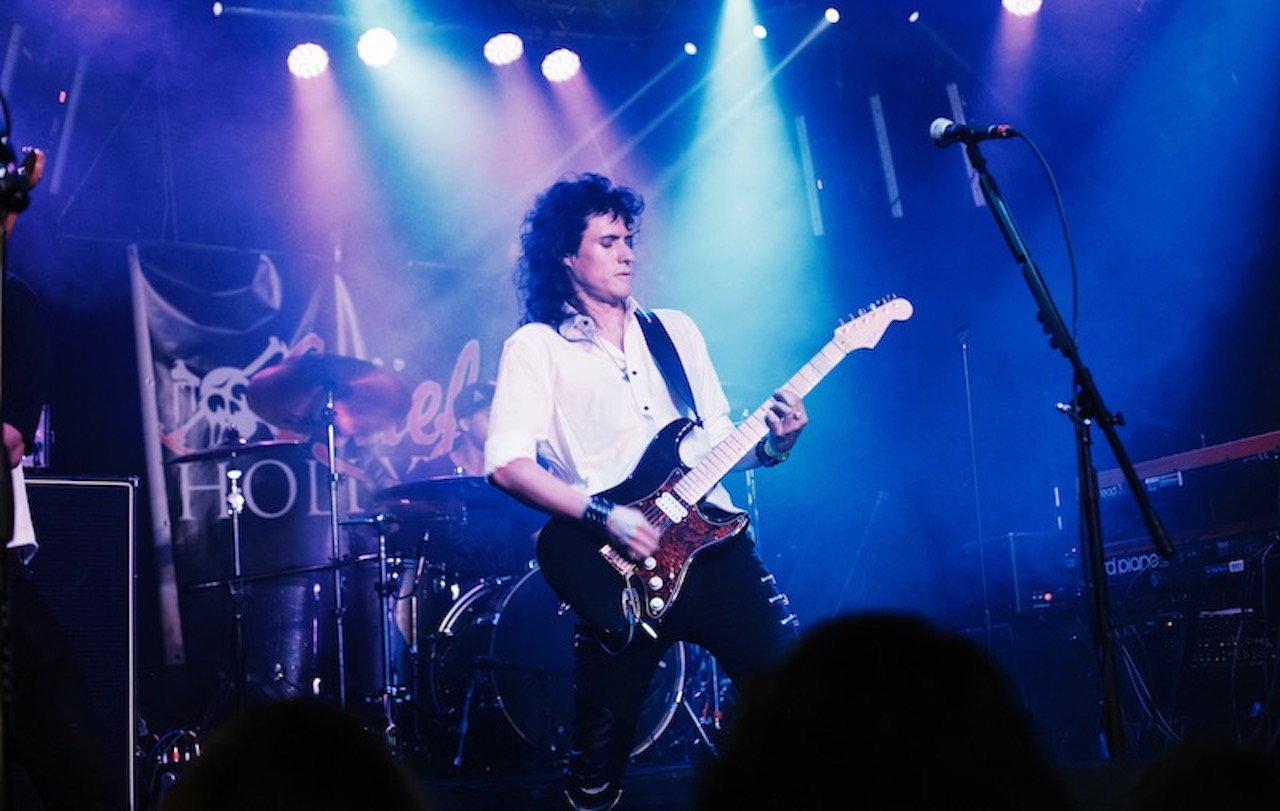 Rocky Kramer, the local rocker who hit #1 on the Global DRT Charts with his single “Rock Star” will be playing the Main Stage at the Sante Fe Springs Art Festival on May 6th, 2022. This incredible event is taking place at The Clarke Estate, located at 10211 Pioneer Blvd, Santa Fe Springs, California, 90670.

“Hailing from the Scandinavian Peninsula country of Norway, Rocky Kramer is truly a modern day Viking, poised to take no prisoners as he conquers the hearts, minds and souls of rockers around the world!”

The Hollywood Digest sat down with Rocky Kramer to find out more about his busy year and projects coming in the near future.

Hollywood Digest: Rocky, this has already been a huge year for you thus far, an appearance in New York alongside some iconic musicians, being selected for a major motion picture and now… what led to you being selected to perform on the main stage at the SFS Art Fest, aside from the fact that you’re a fabulous musician?

Rocky Kramer: Santa Fe Springs is pretty much what I consider home-turf, so I wanted to finally perform for the people in my area. It was something we were planning before the pandemic, but since the festival got cancelled two years in a row because of it, we’re now finally able to do it. The SFS Art Fest is all about expressing yourself, and I’ve actually attended the festival multiple times before, so I’m quite familiar with it and the hard work that goes behind it. The nice thing is that not only will I be performing my music this year, Allied Artists and Mutt Productions will be there as well to talk about our upcoming movie “Rockin’ in Time.”

HD: What can fans look forward to regarding your set list?

RK: The really cool thing about this show is that we’ll have a sneak preview of a couple of new songs from my next album. We’re getting ready to record it, but we want to give everyone there a teaser of what’s to come. We’ll also be playing many songs from my debut album, Firestorm, and I’ll be joined by a very special guest, my close friend and an incredible bass player, Prescott Niles from The Knack.

HD: You’re playing with Prescott Niles from The Knack and Missing Persons?! Tell us more!

RK: Prescott is a very good friend and was technically the first bass player I performed Firestorm with. My band’s bass player couldn’t make my very first performance of Firestorm at the very last minute. I was looking at having to cancel, but when Prescott heard that I was in a pinch, he stepped in to save the day – which is not an easy task with my music! I think we’ll even play a little something the audience may remember from The Knack! We’re going to put on one heck of a show, you watch! We have a very special performance planned for this show, so don’t miss it!

HD: What do you hope your fans will walk away with after the concert?

RK: I hope they have a good time and a chance to escape reality for a moment. That’s what rock & roll is all about… Not having to worry about school or work for that space in time and being able to see someone you enjoy listening to in person. Being in the same physical place as your fans will always be an important part of being an artist. Even with all the technology and digital social interaction available these days, nothing beats live performances!

HD: It’s been announced that Prescott will also be making an appearance in an upcoming, soon to be box office smash movie where you were selected for the lead role. Please explain why you are perfect for the role?

RK: I’ve been sworn to secrecy about much of the movie, but now that they’ve announced that Prescott’s in it, I can spill my guts! Yes, Prescott’s appearing in the movie with me, along with his two sons, Gabe and Noah. One plays Prescott in the 1980’s and the other plays the Knack’s drummer, which is quite fitting since he’s an incredible drummer himself. As for the movie itself, “Rockin’ In Time” is about a Scandinavian 1980s rocker in Hollywood, who ends up traveling through time from 1984 to 2024. I’m often referred to as an ‘80s rocker who had the misfortune of being born in the ‘90s, so – HELLO, I’m pretty much the real-life version, minus the time machine part, lol. I also happen to play guitar and sing, so you’ll actually hear me in the movie, unlike many other actors in movies about musicians.

HD: Will your own original music be incorporated in the movie?

RK: Yes, in two ways. Not only will you hear several Rocky Kramer songs in the movie, I’m actually writing songs for the movie soundtrack, including the main theme. I wrote it in a way that allows it to be transformed into different versions for different scenes and emotional purposes. It’s amazing how the same melody can create such different moods, depending on instrumentation and arrangements.

HD: What is your process in dealing with performance anxiety? Do you get nervous?

RK: It’s all about preparation. If you’re prepared, you shouldn’t feel the need to be nervous, but I get that some people do get anxiety before a performance, and it can definitely make it much more challenging. Experience helps a lot too; once you’ve done dozens, maybe hundreds of shows and performances, you know what to expect, and that makes it easier. The first time is always the worst time. It also helps to warm up properly. That always helps me. It may surprise you, but sometimes I’m more comfortable on stage than anywhere else.

HD: You’ve been seen recently walking the red carpet alongside Akon, fashion designer Richie Rich, Larry Namer, the creator of E! Entertainment, etc… however in September you were featured along with Joey Belladonna from Anthrax, “Sister” Kim Sledge, composer Randy Edelman, and other greats at a 9/11 benefit concert in New York City, what was that experience like for you?

RK: The show in New York City was my first live performance since the pandemic started, so it felt really good, and to commemorate 9/11 felt so special. I was still used to performing because of my weekly show on Twitch, “Rock & Roll Tuesdays with Rocky Kramer,” but there’s a difference between performing in front of a camera and a live audience. It was really fun and Joey couldn’t be a nicer guy or a more talented singer. I had a great time performing the national anthem with him and performing “Put a Little Love in Your Heart” with Randy Edelman. I was a huge fan of MacGyver growing up, and he wrote the theme for that, so having met and performed with Randy is a memory for a lifetime.

HD: You have a weekly rock show, how and why did that originate?

RK: “Rock & Roll Tuesdays with Rocky Kramer” was based on something I wanted to do for years, but never did. Streaming is such an amazing thing, because it allows people from anywhere in the world to tune in and interact with you in real time. So, when the pandemic interrupted my touring plans for 2020 (sigh), I knew immediately that Twitch was the answer. People can watch and chat for free, and they can request songs and ask questions. Not only did it satisfy my need for playing rock & roll for people, it allowed me to interact with and make new friends with many different music lovers from all over the world.

HD: What strong qualities do you have that help to make you the great musician that you are?

RK: First of all, thank you very much for the compliment. I hope to live up to it. Secondly, starting young definitely made a big difference. I knew how to read music at the age of seven, and already played four instruments by the age of eleven. I also went to countless classical concerts because my dad was a first violinist in the Trondheim Symphony Orchestra. That built the foundation I needed, but without consistent hard work, it wouldn’t have make a difference. I spent a lot time simply working on my guitar and vocal technique, even to this day, and that’s something that most people don’t realize. We don’t just pick up our instruments onstage and play. Nor, do we just open our mouths and sing. There are thousands of hours of hard work before the moments audiences see. Also, when you’re a singer, your body is your instrument, so it’s important to stay in good shape and make sure you get enough sleep, exercise and healthy foods.

HD: How would you describe your music and how has it evolved since you began?

RK: My answer keeps changing, lol, but right now, I would describe my music as a combination of neoclassical metal, progressive rock and hard rock. I come from a classical background, so when I started writing rock songs, I naturally leaned into that mindset. It became more defined when I started listening to guitar players like Yngwie Malmsteen, Randy Rhoads and Vinnie Moore, because they sounded like violin players, only with a distorted guitar sound. So, as a violinist, I was drawn towards that sound immediately. That was the foundation of the music I wrote in the beginning, but since then, I’ve written music in practically any genre, because I’m not afraid to branch out. The only question I have is “can I put a pop song and a heavy metal song on the same album?” Stay tuned to find out!

HD: What is the biggest problem you have encountered in the journey of your music?

RK: I suppose the biggest problem I’ve encountered as a musician, is that I want to be an ‘80s rocker, but it’s not the ‘80s anymore. I find it hard to relate to current music, particularly what’s popular or trending at the moment, but at least I’m not alone in that feeling. The most common thing I hear after I perform is that they’re glad I’m bringing back that kind of music. Hopefully, good ole’ rock can have a resurgence so that it becomes as popular as it was in the 1980s again. That thought just sends chill up and down my spine!

HD: How do you energize your fans?

RK: We’re looking for a sponsorship with Red Bull! Just kidding, lol. Fans frequently want to interact with the artist and voila, the internet makes that possible, in infinite ways. I enjoy real-time communications on Twitch, but also responding to comments on YouTube or answering random questions on my Discord server. However, the most important thing will always be performing live, but the fans also seem to enjoy personal interaction, which is great – considering how far away some of us are in physical distance.  Regardless of where you are in the world, if you’re watching my show on Twitch, interacting on Facebook, Twitter or Tik Tok, say hello! I promise not to bite!

The official website for Rocky Kramer may be found at https://www.rockykramer.com