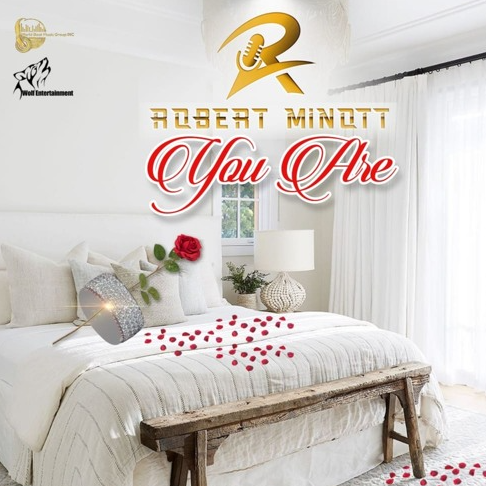 Robert Minott has built his career as one of the finest purveyors of reggae working over the last three decades, but his musical talents don’t stop there. His latest single release “You Are” finds him exploring the world of R&B, adult contemporary, and even light funk with superlative results. It’s the latest turn in a professional career beginning with his 1991 debut and taking him across the North American continent and beyond singing for large and enthusiastic crowds. He has shared stages with many top flight talents such as, among others, Maxi Priest, Ziggy Marley, James Ingram, and Billy Ocean.

You hear evidence of lessons learned throughout the entirety of this song. If Minott strives for naturalness, the stylish interplay between the instrumentation, effects-driven guitar, organ, and keyboards never sounds affected. The best examples of musicians bringing a composition to life always embody the principles of a dialogue and Minott’s “You Are” is no exception. Despite possessing a relatively restrained pace and only three instruments, excluding the vocals, the concentrated nature of that dialogue only increases its energy.

Minott’s vocal works alongside the music rather than being laid over the top. It’s an important distinction. Laying his vocals over top creates a separation between the singing and arrangement – they are sympathetic to one another, naturally, but the distinction is clear. Pairing the music in lockstep with the vocals (or vice versa) creates a stronger seamlessness for the track.

His vocals, however, are worthy mentioning on their own. Minott is a master of nuance. He knows when its right to go overwhelming, understands when to moderate his approach, and manages to communicate emotion throughout. He’s full of confidence without ever allowing it ever bleeding into his vocal.

Incorporating backing vocals so completely into the song may seem like too much for some listeners. Minott’s vocals are more than enough to carry “You Are” on its own, but Minott’s reasons for bringing backing vocals in are many and clear. One of the chief benefits is that is accentuates the song’s musical influences without ever risking imitation. Another is how it creates a dramatic dynamic between the primary and secondary voices that further entertains listeners.

The lyrics are tailored to suit the track. There is no effort by Minott to remake the songwriting wheel with the words, but it’s nonetheless intelligent and suits the track. His understanding of what songs in this vein require aids him immeasurably. These are among the attributes of fine songwriting standing out here. Minott’s understanding of songwriting craftsmanship is, arguably, the single biggest reason for the song’s success.

It’s been a hallmark of his career from the outset though. Robert Minott is one of those unique figures who offered ample evidence of his talents early on and has only kept improving over time. “You Are” finds him working near or at the peak of his powers and there doesn’t appear to be any reason we can expect a drop off anytime soon. It’s a thoroughly satisfying musical experience.

The music of Robert Minott has been heard all over the world in partnership with the radio plugging services offered by Musik and Film Radio Promotions Division.  Learn more https://musikandfilm.com